The history of marijuana in the movies

Cannabis has been a favorite subject of cinema since the beginning of the silver screen. Here is a brief history of the weed in Hollywood.

Cannabis and cinema have a long history together. The birth of modern cinema happened around the same time as the first criminalization of cannabis by the U.S. federal government. At that time, around the 1930s, as a result, cannabis-themed entertainment lay in the world of horror. If not scare stories.

From that point on, weed has continued to wind its way through cinema. It is funny to see how it was depicted in different ways. As some killer drug that might make you gay or even kill you, or as something that makes you look a whole lot cooler.

It is of course also very possible to see how counter-culture impacted early acceptance of cannabis use. And how it was parodied in oh so many ways along the way.

Nowadays more and more modern movies and TV shows have begun to tackle the issues involved in everything from legalization to updated stoner humour.

THE (NINETEEN) THIRTIES – A PROPAGANDA DANCE WITH THE DEVIL 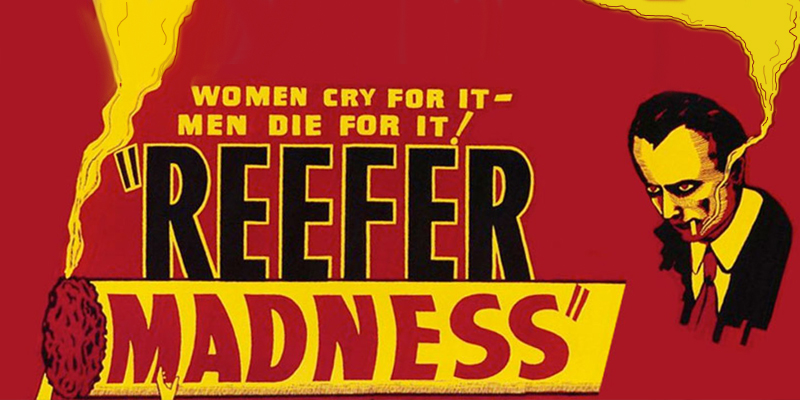 There are several zingers from this period of time that leave no doubt about their view of cannabis. With titles like ‘Marijuana: The Devil’s Weed’, it’s hard to leave room for imagination. This and other similar endeavours were the brainchild of one Dwain Esper.

Esper was a former building contractor turned filmmaker in the 1920’s. Also on Esper’s resume? Assassin of Youth, Sex Madness, Sex Maniac, Narcotic and How To Undress in Front of Your Husband. Charming guy this Esper right?

Reefer Madness is another classic of the era. Colorized, remade and referenced in musicals, spoofs and late night television, it will never die and still circles around on the web as a very good example of a very bad propaganda film. Financed by a church group, it was originally produced as an “educational” film. Esper later recut the film and distributed it as part of his growing catalogue.

Throughout the thirties, in fact, marijuana remained a staple prop for teen miscreants. And as subject matter it did not regain cultural significance until of course, the 1960’s.

EASY RIDER AND FLOWERS IN YOUR HAIR 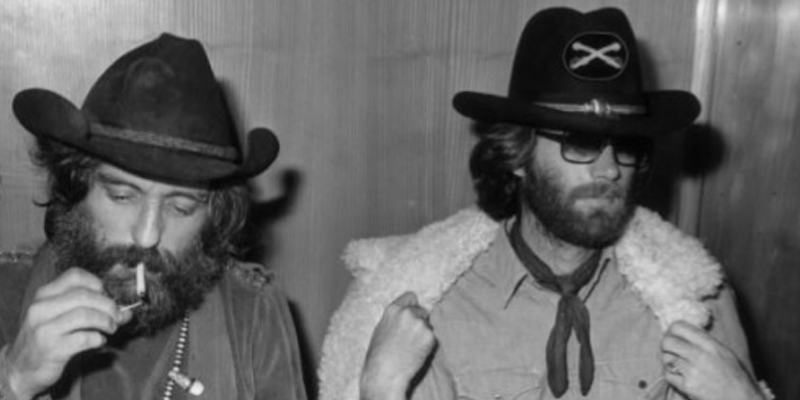 The youth culture of the 1960’s saw the next big Hollywood discussion about cannabis – and that happened in one of two ways. It either showed up in counter culture films – Easy Rider (1969) being just one. Or it showed up in documentaries or early “music videos” if you will.

Portrayal of pot use in particular was widely shown as part of youth culture, music culture and 60’s mainstream “alt” culture for a good decade. It was also part of beat literature and the writers of the era including Hunter Thompson and Charles Bukowski, who wrote about drug use.

Although still portrayed as “outside” of mainstream adult use, the first mainstream portrayals of the positive impacts of drug use, including marijuana come from this time.

Of course it should not be forgotten that there were also still movies made like Maryjane (1968), in which marijuana was portrait as something really bad, and something you might end up in jail for.

By the 1970’s, drugs in general and cannabis in particular hit a strange period. The theme of the times, which lasted, with few exceptions until the 1990’s, shifted dramatically. Drugs were demonized. The consequences of being mixed up in them dire.

See Midnight Express, a movie about an American student getting caught for smuggling hashies out of Istanbul and ending up in prison. See Death Drug, a serious movie gone kitsch-college circuit flick circa 1978. The plotline? Unmemorable, except for a very creative presentation of a PCP-induced hallucination in a supermarket.

Another interesting example is Taking Off (1971), in which a group of conservative middle-class parents is shown how to smoke weed.

“This is a joint…. After you inhale, you take the joint and you pass it to the person sitting next to you. Do not — repeat — do not hold onto the joint. This is called bogarting the joint and is very rude.”

Weed is depicted as something naughty but pleasant, but of course also this movie doesn’t go without containing some warnings of marijuana being illegal. Before the joints are being lid, it is being mentioned that “a man in Michigan was sent to prison for having just 2 joints”.

The trend of warning people for drug use lasted comfortably for at least a decade, and even more. This also included quite a few movies about heroin addicts. Drugstore Cowboy (1989) was only one of them.

The few exceptions to this period, portrayed cannabis in one of few ways. One, from the comedy angle, was the Cheech and Chong approach. Using a multitude of stereotypes, including race, the comedic duo used pot as a centre of their humour for most of the 70’s. Some would argue that Cheech and Chong movies were probably the first ever “stoner” movies around.

In films like The Breakfast Club, cannabis was still relegated to the realm of supposedly ostracised loner. In fact, Breakfast Club, along with The Big Chill were the first films that began to mainstream cannabis again. It wasn’t really humor. It wasn’t exactly stereotyping. But in a side conversation, cannabis for sure began to show up on the big screen again.

THE NINETIES AND LATE CENTURY REVISIONISM 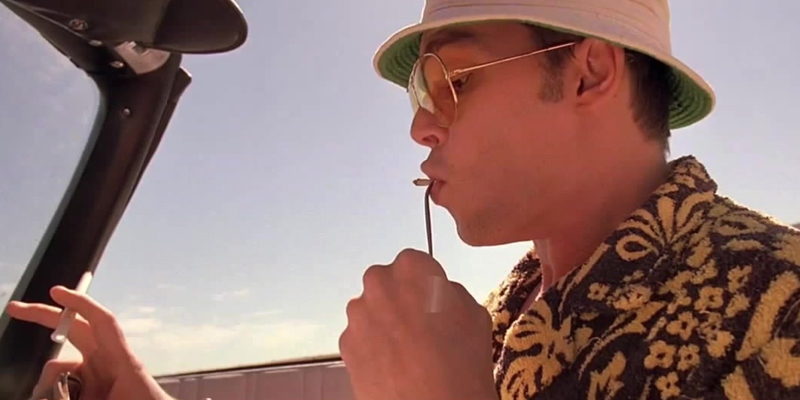 By the mid-nineties, culturally speaking, the U.S. was in the midst of the next part of the legalization discussion. Fear and Loathing in Las Vegas was finally made into a movie. The book by Hunter Thompson had shaped a part of this debate off-screen since he wrote it. The making of the film version was the beginning of the really modern portrayal of at least cannabis.

As the new century dawned, however, films about drug use tended to also now go in two different directions. There were films about junkies (see Requiem for a Dream). Or even Enter The Void in 2009. Trainspotting (1996) is another good example. The other, not junkie direction, were films like The big Lebowski, Friday and Dazed and confused, depicting stoners as slackers on their way to possibly ending up as junkies, but with a good sense of humor around it.

However, legalization off screen also began to make an impact on how cannabis was being portrayed. It began to make small on-screen appearances for most of the decade. When American Beauty showed pot use as a way out of the American nightmare, it rang cultural bells. The conversation had clearly shifted again.

CANNABIS ON THE SCREEN IN THE ERA OF LEGALIZATION 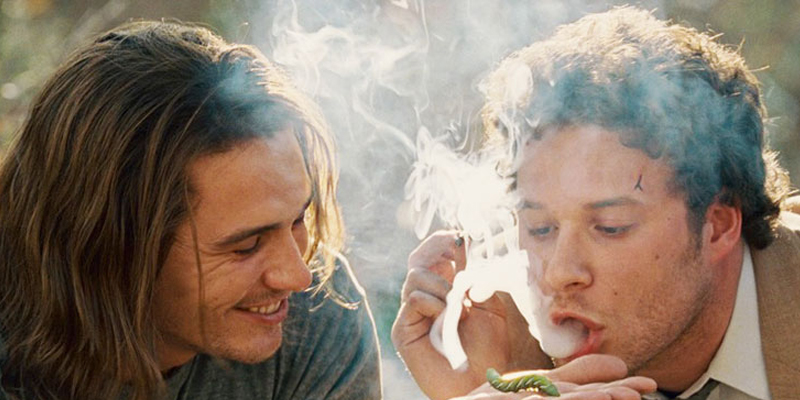 Sex, drugs and rock and roll have so long been a part of Hollywood culture. So much so that it is hard to really understand how to separate the two. However there has been a definite new shift towards particularly cannabis over the last decade. Since legalization in 2014 in Colorado, entertainment in general has become decidedly more pro-pot centric.

Films like Saving Grace (2000) and Pineapple Express (2008) dealt with the issue humorously but not at the expense of users. Documentaries like Super High Me (2007) also began to look at the political forces now pushing reform.

Also The Wolf of Wall Street, which showed graphic drug use of all kinds, kicked in a new era in drug portrayals in Hollywood. The 2013 satirical black comedy took on many issues. Drug use was just one of them.

And of course, legalization will be a major theme in digital entertainment going forward for at least the next decade. Disjointed, Kathy Bates’ new sitcom series about a pot shop in LA has been signed for a second season of episodes.

From a cannabis lovers perspective it is nice to see how cannabis use is slowly being accepted, but watching this very bad depiction of life around a dispensary most likely makes you want to throw up all over Netflix as it is just one stereotypical joke after the other, putting us users in a whole new (not so bright or flattering) light.

The age of Hollywood and cannabis seems to have entered (yet another) new era. Coming already to a big if not digital screen soon near you. Let’s hope it will not stop at propaganda and badly portrayed “stoners”. God I hate that word.

The legend of 420: documentary review

Is cannabis safe for pets?

Video of how to make ice hash with bubble bags