Looking for stoner movies? Check out Ripped (2017). Not the best stoner movie made, but still good for some laughs. Find more movies on CannaConnection.

And here are our 2 cents:

In the long, ever-growing list of stoner movies, there is another movie you could add to your lazy couch-hanging Sunday night movie night. But don’t expect too much.

This movie feels like it has been made by a couple of real stoners who thought that if an audience is high enough, they will probably swallow anything.

Although the movie starts pretty funny and with a reference to Half Baked, Ripped turns out to be literally half baked. Bad acting, one (almost insulting) stoner-stereotype after the other, boom mics hanging in the shot and lots of smoke screens. That said, there is still a laugh or two for the careless viewer who likes to have something running on the background while filling up a bowl.

The story is about two stoner buddies who end up smoking some top secret CIA-made weed while heading to a Run DMC concert in 1986. This super-weed called G14 whips them into a 30-year coma from which they awake in 2016. 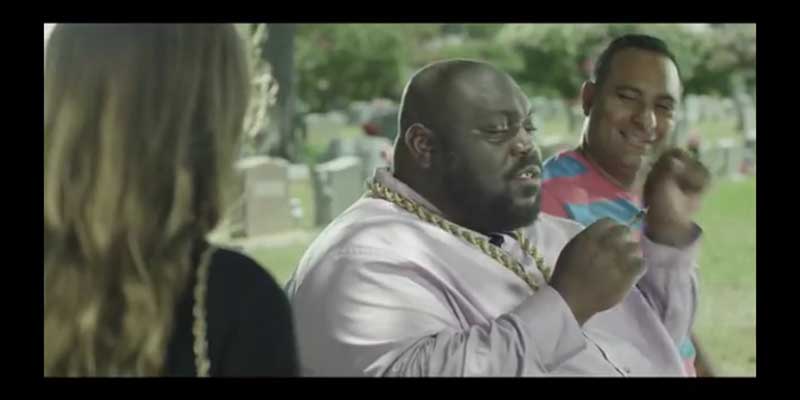 Reeves (Faizon Love) and Harris (Russel Peters) are a bit weirded out by the fact that they wake up as a couple of old guys in the same clothes they were wearing as youngsters before wondering into the new world. But somehow things like automatically flushing toilets and mobile phones surprise them more than the fact that smoking some weed has put them in a 30-year coma.

The rest of the movie is about Harris trying to get his old girlfriend back and the two friends needing to start some (weed) business in order to survive, but somehow it doesn’t really get off the ground. The mood is sometimes enjoyable, but it didn’t crack us up at any point, nor could it hold our attention long enough.

Brad Epstein’s first attempt to make a stoner film makes you realize that some directors take it a little bit too easy. The idea for the premise is fine, but it is not carried through as far as it clearly could.

A good stoner comedy should be a comedy in the first place, and a stoner movie in the second. Pineapple express, Half Baked, Dude, Where’s my car?, Harold & Kumar go to White Castle, those were good stoner movies. This movie simply isn’t.

How and why to keep your grow room clean