The anatomy of a cannabis plant

Chances are, you know what a cannabis plant looks like. Do you want to know how to distinguish all the different parts of the cannabis plant and understand their different functions? Look no further. 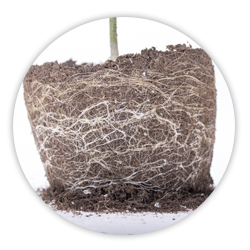 The roots are the “heart” of your cannabis plant. They look like fine white hairs and serve to take up water and nutrients from the soil or other grow media. Strong roots are key for developing strong, resilient plants, supporting vegetative growth, and facilitating a heavy harvest. 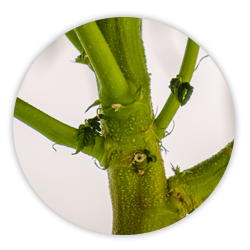 The stem of a cannabis plant reaches from the seed up to the tip of the cola, and is the centerpiece from which all other branches grow. Cannabis stems usually aren’t smoked, but they can be kept and used to brew a rich cannabis tea. 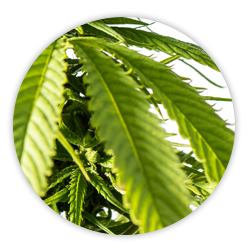 Fan leaves are the large leaves on a cannabis plant, usually located below clusters of flowers. These leaves (which are packed full of chlorophyll) serve as the center of the plant’s energy production. While some cultivators discard them post-harvest, others hold onto them to make concentrates, or to include in healthful, vitamin-rich smoothies. 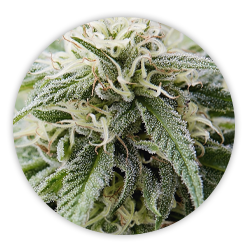 Sugar leaves are the leaves located close to a female flower. These leaves tend to contain a fair amount of trichomes (unlike fan leaves) and therefore also contain terpenes and cannabinoids. People tend to use sugar leaves for cooking, but they can also be smoked just like regular buds. However, they tend to be much harsher than regular bud. 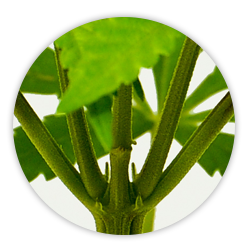 The term “node” refers to the intersections in a plant’s stem or branch where other branches form. Internodes, on the other hand, refer to the spacing between these nodes. Sativa strains tend to have large internodal spacing, for example, which is why they generally end up growing into large, stretchy plants. Indicas, on the other hand, tend to have shorter internodal spacing, which is why they end up being bushier.

Related Article
The difference between indica, sativa, ruderalis and hybrids 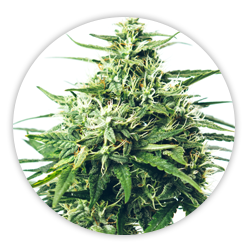 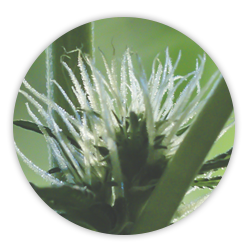 Cannabis pistils contain the reproductive parts of a female cannabis plant. They also house the stigma, which are the long, hair-like strands that you’ll see protrude out of female flowers as they mature. These stigmas tend to start off a milky white color, and eventually turn a rich, orange/red color as the plant matures and approaches the end of its flowering cycle. 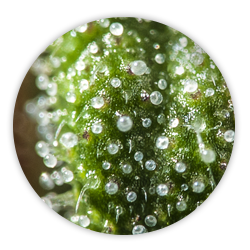 Trichomes are minute glands that make up the thick layer of “crystals” you’ll find covering cannabis flowers. These tiny glands look like tiny mushrooms under a microscope and harness the plant’s resin, which is rich in cannabinoids, terpenes, and other compounds. Experts believe cannabis trichomes help protect the plant from predators. 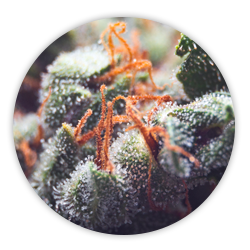 The calyx is the first part you see when a cannabis plant starts flowering. It's a collection of small leaves that protect the reproductive organs of the plant. It's also the most resinous part of plant. When a plant is not pollinated the calyx is where the formation of all those smelly buds will start. If a plant is pollinated the seeds will form within the calyxes. 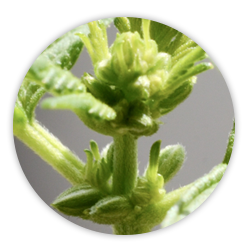 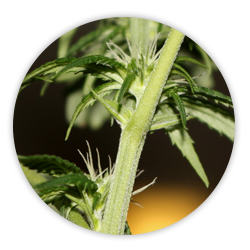 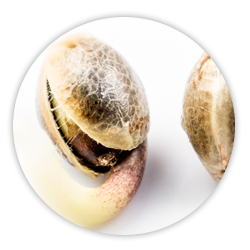 This is where it all starts. Cannabis seeds are produced when female flowers are pollinated by nearby male plants, and house all the genetics needed to create a brand new cannabis plant from scratch.

Related Article
How To Get More Female Plants From Regular Seeds

How to germinate cannabis seeds

What are nodes and internodes of cannabis plants?