Top 10 board games to play high

Board games are still all the rage. And now that you're an adult, you can get high and have even more fun playing them as you did when you were a kid.

As we transition into adulthood, some of our favorite childhood things get left behind. But our love for them usually remains intact. For some, it can be a doll or action figure that stole their heart at a younger age.

For others, it is board games. If you thought board games were fun as a child, try playing them now that you're old enough for a smoke sesh or some pot brownies.

Although board games might seem like a thing of the past, they are by no means dead. In fact, there are still new ones hitting the shelves today. Some companies are even taking classics like Monopoly and creating new versions with special themes.

This is probably because they know that despite the thousands of video games out there these days, board games will always manage to bring cosiness to the table.

Like video games, board games can be a blast when you're high. Whether it's a holiday or just another regular night in with your pals, busting out a couple of board games and smoking your favorite herb makes for one hell of a fun time. In case you need some ideas of what to play on your next game night, we've come up with a list of a few of the best board games around. 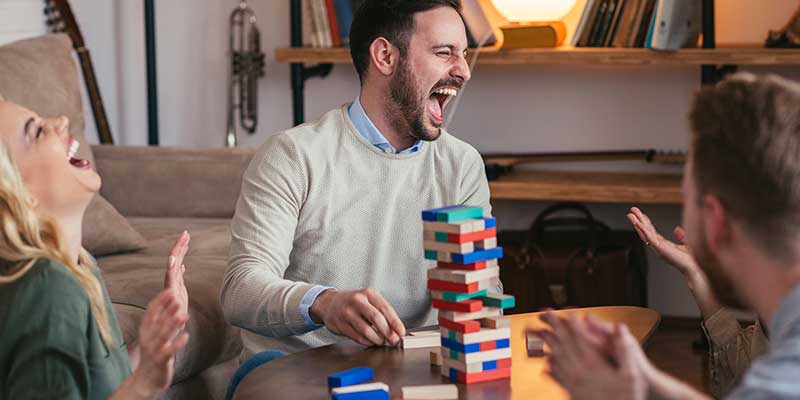 Jenga not only requires focus, but also balance. The whole goal of the game is not to knock over the wooden tower, which consists of 54 blocks. When it's your turn, you must pull one away from the tower and then set it on top, ever so gently.

With that being said, concentration and a steady hand are paramount to winning the game. Whoever sends the tower tumbling down is the loser. To avoid being that guy, get your toke on beforehand to help you keep your head in the game and claim your victory.

If there's one thing to be said about this game, it's that it's competitive. Good ol' Monopoly, the board game that's been putting friendships to the ultimate test since 1935. The objective is to snatch up as many properties as you can while avoiding bankruptcy and jail time. That's easier said than done when you have a limited source of income.

Land does cost money. And players must also fork-up the dough for rent when they wind up on someone else's turf. So yeah, to say that tensions can get high is an understatement. But if everyone remains calm, no one will get hurt. So to ensure that you and your friends make it out alive, getting nice and mellow by hitting a bong before starting this game might help.

In fact, you might as well have something ready at hand at all times, as you never know when shit will hit the fan.

Hungry Hungry Hippos is as straightforward as it gets. The hungriest hippo wins, or more specifically, whoever manages to gobble down the most marbles wins. Sounds boring, but you and your buds will have a ball getting high and pounding away on the animals and making lots of noise.

Unless you're one hell of a multitasker, you should probably blaze before you start though, as keeping up the pace is necessary and you may want to use both hands.

The buzzing sound and vibration that resulted from not correctly removing one of Cavity Sam's 12 silly ailments is something no child will ever forget. You saw it coming, yet it still managed to scare the crap out of you no matter how many times you played. Although you may not have been an excellent surgeon as a kid, now that you’re an adult and are allowed to get a little help from cannabis, you might surprise yourself.

Plus, poking and prodding someone whose life is in your hands might actually relieve some stress. And even if you manage to screw things up, at least you'll get hit with a boost of adrenaline every time you drop the Adam’s apple or bump into something that shouldn't be touched. 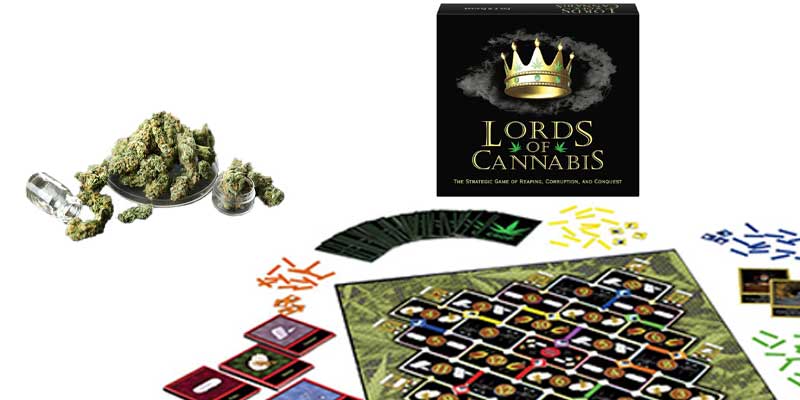 A game that revolves around cannabis is, of course, the perfect thing to play when you're stoned. In like manner of the game Risk, Lords of Cannabis is a game of strategy. Your mission is to dominate the weed market in three ways: strategy, trading, and risk. While building your empire from the ground up, you must avoid the cops at all costs, not to mention the players and the mob that are out to get you. But it's not as serious as it seems.

In fact, it's downright hilarious. This game will have you and your friends will staying up all night playing and smoking endless amounts of weed because there can only be one true Lord of Cannabis.

Related Article
5 Video Games To Play While You're High

Connect Four is a simple, yet entertaining game to play. You don't even have to look at the directions to know how it works. Just form a horizontal, vertical, or diagonal row of four colored discs, and you win.

Will you want to knock the other players’ heads off because they are constantly blocking your opportunity to line up your pieces? Maybe. But you'll be less likely to act out the impulse if you're high. So just enjoy the game, your high, stay chill, and don't give up. You're bound to win at least once.

If you want to find out what your friends really think, then look no further than Say Anything, a board game that encourages them to let it all out and not hold back. After asking the players a question, each of them will respond and write down their guess as to which answer they think you like best. For example, "What's the worst thing to say to a cop?" Or, "What's the worst thing about being a man?"

Imagine how creative you and your friends can get with the answers after smoking a fatty and letting your thoughts run a bit. And since there are no right or wrong answers, there won't be any pressure to get in the way of having a blast with your pals. With this much laughter, everybody wins.

Related Article
Why Does Marijuana Make You Laugh?

Are you the know-it-all amongst your circle of friends/family? If so, then prove it to them by kicking their tail at Smart Ass. Playing it is a no-brainer. Answer some trivia questions and be quick about it. The first player to make it around the circle is the winner.

To begin, players will roll the numbered dice to see who lands on the highest number. Whoever gets the highest number is the reader and will then roll the colored dice. Each color represents one of three different cards: “Where am I?”, “Who am I?”, “What am I?”. All three types of cards come with clues, which the reader will use to help the players guess the answer.

Any player can yell out their answer at any time, but they only get one chance to get it right, so be prepared for some hilarious chaos. 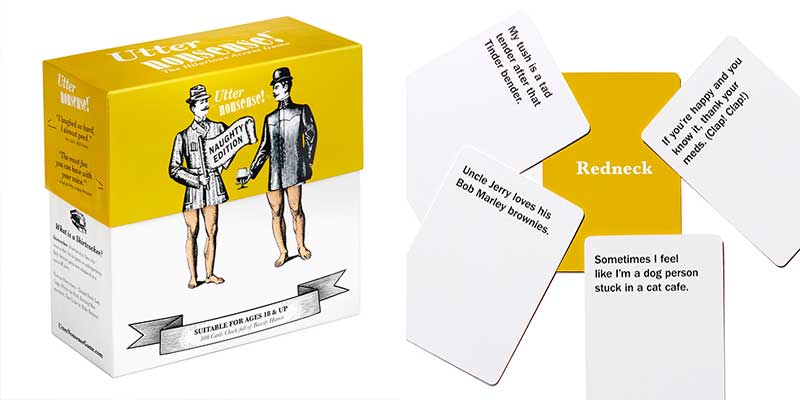 Combining weed with this crazy accent game will have you geeking after just a few rounds. How it works is that players draw both an accent and a phrase card, and then act them out.

For example, one might pull a redneck accent and then a phrase that reads, "Uncle Jerry loves his Bob Marley brownies". Can you pull it off? You can even come up with your own phrases and believe us, some of them won't make a bit of sense, but that's what makes it so fantastic.

They say this game is designed specifically for kids, but let's be real, even as adults, farting is still funny. And that's what the game is all about, farting, aka tooting.

Each player gets a whoopie cushion-shaped controller, which controls the character in the center of the board. Once the controllers light up, only one person can make the little dude rip one. And after he lets out a fart, everyone will have to guess who made him cut the cheese.

So just like in real life, you'll want to keep a straight face, or else you'll give yourself away. It might seem a bit boring at first, but believe us when we say that this game can crack you up real good, specially if you’re a bit buzzed.

5 random playlists to listen to when high

Help, i smoked weed and felt nothing

The fine art of trellising your marijuana plants

More weed harvests per year with the 12/12 method