Here are some plants that produce cannabinoids (other than cannabis)

Did you now that other plants (beside cannabis) can also produce cannabinoids? Check out this list of plants known to activate the endocannabinoid system.

In the last few years, cannabis has taken center stage as possibly one of the most useful (and most misunderstood) medicinal plants on the planet. Recent research is showing that marijuana has a wide variety of potential medicinal properties, thanks to it containing unique active compounds known as cannabinoids.

But what if these cannabinoids aren’t unique to cannabis after all? New research suggests that a handful of plants may also contain cannabinoids or similar active compounds and therefore harness some of the same power as marijuana.

CANNABINOIDS, THE ECS, AND CANNABIMIMETICS

Before looking at distinct plants that contain cannabinoids, it’s important to have a simple understanding of the following 3 terms; cannabinoids, endocannabinoid system, and cannabimimetics.

Cannabinoids are a class of chemical compounds that interact with cannabinoid receptors found in humans and other mammals, including dogs, cats, pigs, and more. There are two types of cannabinoids:

When we consume cannabis, the phytocannabinoids from the plant interact with our body's endocannabinoid system (ECS) which is responsible for managing a whole variety of physiological processes.

Up until recently, it was generally believed that the ECS consisted of two main receptors, known as CB1 and CB2. However, research from the last couple of years has shown that the endocannabinoid system may be much more complex than we once thought.[1]

This research suggests that the ECS might actually comprise of many more receptors than just CB1 and CB2 as well as a variety of ligands that promiscuously interact with a vast spectrum of other receptors.

In fact, as research into the ECS grows, we are finding that there are a wide variety of compounds that interact with this system both directly and indirectly, despite not sharing the same structure as traditional cannabinoids.

Compounds that activate the endocannabinoid system, especially CB1 and CB2 receptors, but don’t necessarily share the same structure as traditional cannabinoids are called cannabimimetics. As the name suggests, these compounds mimic the biological activity of traditional endo or phytocannabinoids.

Thanks to new research, we’re discovering that there are many plants with cannabimimetic properties. Here is a list of just some of the most popular plants that can activate your endocannabinoid system.

Remember, these plants won’t get you “high” because they don’t contain any psychoactive compounds like THC. 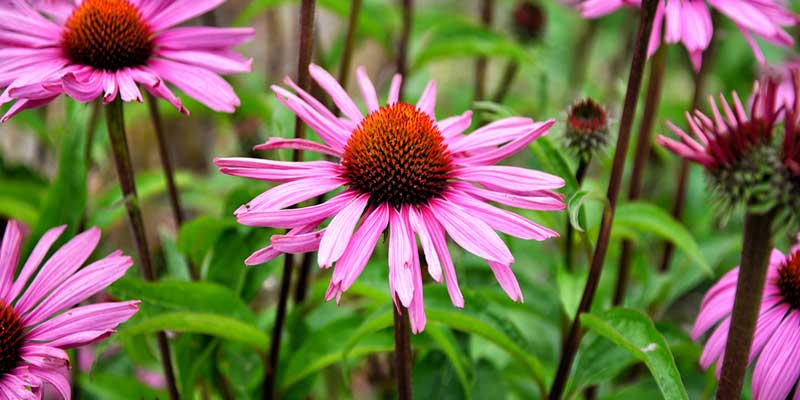 Echinaceas belong to a group of flowering herbs that belong to the daisy family. Echinacea and derivative products like extracts, oils, roots, or teas are often praised for having anti-inflammatory benefits, helping curb anxiety and stress, and much more.

Recent research shows that echinacea contains N-alkylamides(or NAAs). These are a group of bioactive compounds which are believed to have a broad and promising functional spectrum. In low concentrations, these NAAs have been shown to interact with the human CB2 receptors and produce similar anti-inflammatory effects as anandamide and THC. 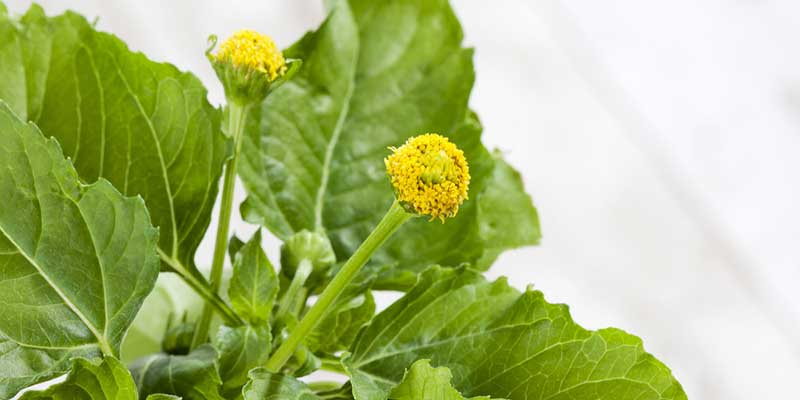 The Electric Daisy, also sometimes known as the toothache plant or Sechuan button, is a curious plant believed to be derived from a Brazilian species of acmella plants. The plant is often used in cooking and is believed to have a long history in treating stammering, toothaches and stomach distress.[2]

The Electric Daisy is believed to contain a unique concoction of cannabinoid-like compounds known as N-Isobutylamides. Similar to the NAAs found in Echinacea, these compounds are believed to activate CB2 receptors to produce pain-relieving and anti-inflammatory effects, much like anandamide, THC, and other cannabinoids. 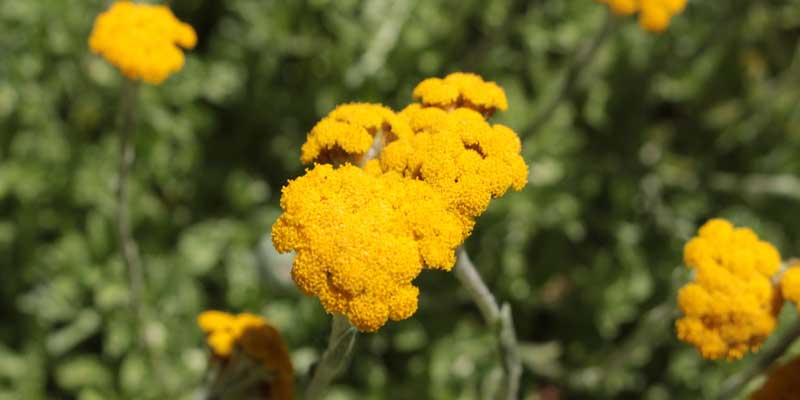 This odd plant is native to the African continent and is believed to be part of the daisy family (like echinacea). It is believed to contain high concentrations of CBG, a cannabinoid known for having unique antidepressant, mood stabilizing, and anti-inflammatory properties.

Related Article
What Is Cannabigerol (CBG)?

At the 24th annual meeting of the International Cannabinoid Research Society held in Baveno, Italy in June 2014, Giovanni Appendino (an Italian researcher, chemist, and professor at the Università del Piemonte Oriental) gave a speech in which he touched on the topic of finding cannabinoids in plants other than cannabis.[3]

In his speech, Appendino reported that a large amount of CBG and its carboxylic precursor had been isolated from a specific Helichrysum variety found only in South Africa. However, there has been little further research into this plant and how it produces CBG, due to strict South African regulations designed to prevent foreign corporate exploitation of the country’s unique genetic resources and simultaneously impede scientific research. 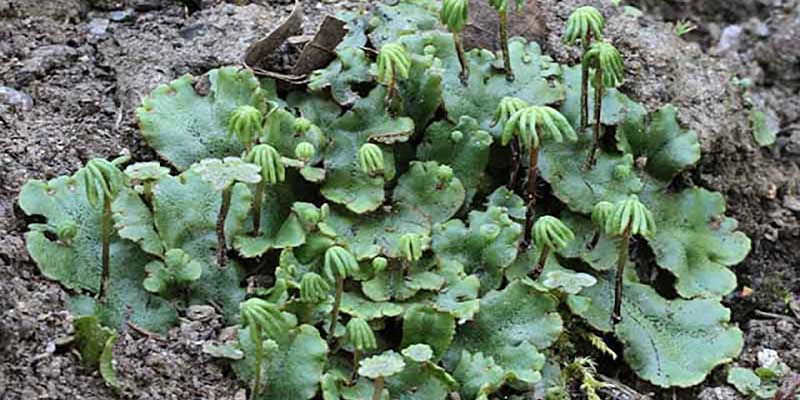 There are an estimated 9000 species of liverworts scattered around the world. However, research suggests that a specific species found in New Zealand contains a compound that’s remarkably similar to THC.

Some users have experimented with smoking the liverwort which produced mixed results, including a slight “head buzz” and a strong irritation of the mucous membrane of the lungs and throat (among others).

Radula marginata has a long history of being used to make rongoā and taonga, two types of traditional Maori herbal medicine. 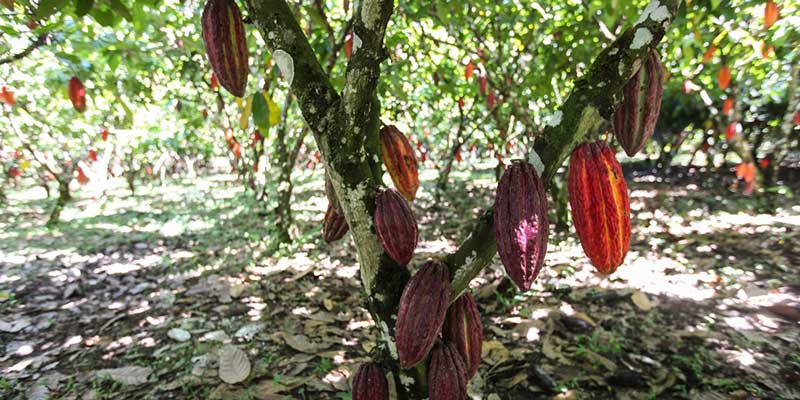 The cocoa tree has given us one of the sweetest treasures on earth. Now, it seems the plant behind the world’s favorite sweet treat might also contain another hidden power.

Some cannabis users claim that eating dark chocolate before using cannabis produces a much stronger “high.” This is because chocolate contains N-Linoleoyl ethanolamide and N-oleoylethanolamide, two compounds which interfere with an enzyme known as FAAH.

FAAH is responsible for breaking down anandamide, an endocannabinoid often referred to as our body’s “own THC.” Anandamide is said to produce feelings of euphoria and reduce our sensitivity to pain, and is believed to be behind the “runner’s high” many people feel after exercising.

Both N-Linoleoyl ethanolamide and N-oleoylethanolamide are known to deactivate the FAAH enzymes, which in turn increases anandamide levels in our body. Combine this with a strong dose of THC, and you’re on your way to feeling extra euphoric, uplifted, and happy, all the while experiencing less pain. 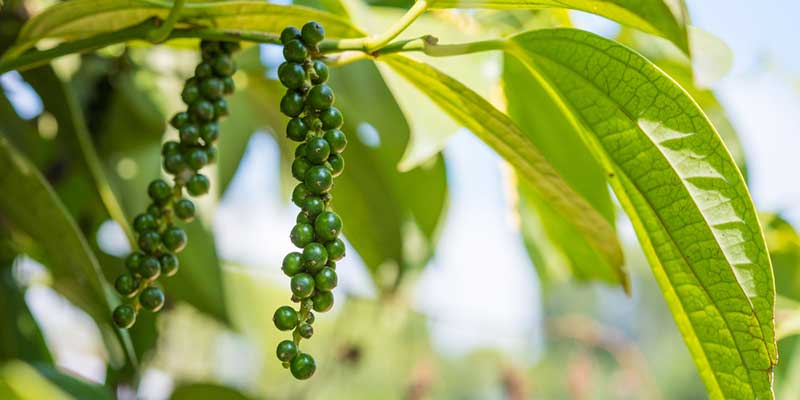 Some strains of cannabis are renowned for having a particularly spicy, peppery aroma. Well, research into the compounds of cannabis and pepper reveal just why that might be.

Cannabis and pepper are known to contain high concentrations of beta-caryophyllene, a terpene with a potent aroma often believed to give black pepper its unique smell. Recent research suggests that beta-caryophyllene acts much like a cannabinoid, binding to CB2 receptors.

It has been shown to have strong anti-inflammatory effects, which may help in the treatment of a wide variety of conditions. Other research has indicated that BCP may also increase the efficacy of anticancer drugs.[5]

Related Article
Cannabis Terpenes: Everything You Need To Know

THE FUTURE OF CANNABINOIDS; SHOULD WE BE LOOKING BEYOND CANNABIS?

The above list features only a handful of plants known to contain cannabinoids or cannabimimetic agents. Some others include Peruvian maca and Chinese rhododendron and, as research into this field expands, there’ll surely be more to come.

But what does all this mean? Well, for now, it’s hard to tell. Although it seems like new discoveries about cannabis are being made every day, there is still a lot we do not know about cannabis, cannabinoids, the endocannabinoid system, and how they all interact.

However, the fact that other plants contain cannabinoids or cannabimimetic agents is promising as it gives researchers more possibilities for sourcing cannabinoids and experimenting with them in the future.

Want to improve your high? Eat a mango

What are nodes and internodes of cannabis plants?