But, despite being known for his radical and passionate views about cannabis, prohibition, and the potential of the hemp plant, Jack wasn’t always the weed enthusiast we know today. In fact, he didn’t even come to try cannabis until his 30s.

Jack Herer was born in 1939 into a conservative Jewish family. He grew up in Buffalo, NY, and enlisted in the army when he was 17 years old where he served as an MP in post-war Korea. By his late twenties, Jack was married with 3 children and living what many would call a pretty regular life.

Thanks to his time in the army, Jack was a proud American and a straightforward republican who shared traditional, conservative American values and ideals. He was in favour of America’s role in Vietnam and labelled the anti-war protestors of the raging 60s as “the most un-American kids in the world.”’

Most surprisingly, Jack also hated marijuana mainly for it’s association with the hippie movement and other kinds of subcultures. Plus, he has also admitted to having a deep, underlying fear of the drug, mainly due to the “Reefer Madness” campaigns he’d seen as a kid.

JACK HERER AND HIS RELATIONSHIP WITH WEED

So what exactly lead this conservative, hard-working American to become one of the biggest cannabis activists on the planet? In the late 60s, Jack and his wife divorced. One night, Jack’s new girlfriend would unknowingly change his life by asking him a seemingly simple question.

“She said ‘Jack, have you ever smoked marijuana?’ I said of course not, no. She said ‘I think you should,’” recalled Jack in an interview for a documentary titled Jack Herer - Emperor of Hemp. From there on, Jack’s life would never be the same again.

“I was feeling all these sensations that I didn’t even know a human being could experience and I said to her ‘why is this illegal?’” said Jack about his first experience with pot. “I began to hear the protesters about the war in Vietnam and their words had real meanings and textures.”

In 1973, Jack co-authored a little cartoon book about cannabis titled Grass: Great Revolutionary American Standard System together with his friend Al Emmanuel. Little did he know that the book would find an underground following and go on to sell about 30,000 copies. Almost instantly, Jack became a pot authority.

“Everybody thought that I knew everything about pot… If I came across a marijuana plant growing in a field I wouldn’t have even recognized it,” said Jack. However, it didn’t take long for him to learn about the history of the plant and its complex relationship to mankind.

Jack soon learned about hemp, its relationship to cannabis, and the many industrial uses for the plant, which would come to be the basis behind his activism for years to come. He approached other activist groups such as the National Organization for the Reform of Marijuana Laws (NORML) and invited them to join forces. Unfortunately, no one joined Jack on his hemp crusade.

Activist groups like NORML were mainly concerned with the criminalisation of cannabis and the legal concerns it caused for cannabis users. Hemp, to most activists, was a secondary issue. That, combined with Jack’s enthusiasm and tendency to “rant and rave” about many issues, meant his message mostly fell on deaf ears.

However, Jack did manage to reach someone; a cannabis activist known as Captain Ed, owner of Captain Ed’s H&H Shoppe in Los Angeles. Together, Jack and Captain Ed, formally known as Ed Adair, would go on to gather thousands of signatures about hard-hitting cannabis and hemp issues for years to come.

“Captain Ed and I made a pledge. It was to work every day to legalize cannabis until we were dead, it was legal, or we turned 84,” said Jack. “We always felt the great injustice of anybody being in jail for cannabis for any reason would always be too big of an injustice to walk away from and not spend almost all of our time trying to change.”

JACK’S REVELATION: HEMP COULD SAVE THE WORLD

In 1974, Jack experienced what he went on to describe as nothing short of a revelation. Thanks to the culmination of all the new things he’d learnt about cannabis and hemp, Jack had the sudden realisation that the plant could potentially save the world.

Jack realized that every product currently made from trees, fibre, or petroleum, could actually be manufactured using hemp; from paper and clothing to clean fuel, hemp could be the backbone of basically all of the industries in the world. For Jack, hemp was the solution behind big, global issues like pollution, global warming, deforestation, and more.

At first, Jack’s newfound hope in hemp did little to better his image among cannabis users and activists. “My own kids thought ‘dad, you’ve gone overboard,’” he recalls. “NORML felt the same way; you didn’t tell people that marijuana was going to save the world or no self-respecting person would come to the marijuana movement.”

Despite the criticism, Jack stuck to his guns. By 1979 he and Adair opened the US’ first hemp store together; a small outdoor stand located along Venice Beach in California, where Jack soon became an icon of the famous Venice Boardwalk.

THE EMPEROR WEARS NO CLOTHES 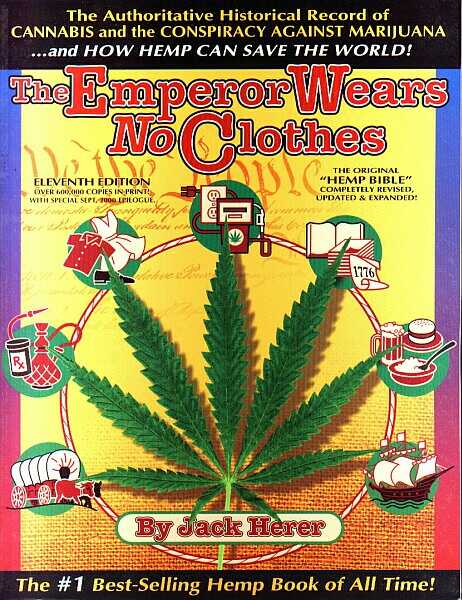 The 1980s marked the beginning of the US’ zero tolerance policy against cannabis and other drugs. In 1981, Jack and a group of protesters were arrested for campaigning for cannabis reform. Jack refused to pay the $5 fine he was handed and, in 1983, was sent to federal prison at Terminal Island, CA.

Like many great revolutionaries, Jack used his time in prison to begin working on a new book. In 1985, he published The Emperor Wears No Clothes, arguably one of the biggest publications about cannabis and hemp to ever hit the shelves. The book became an underground phenomenon and sold over 600,000 copies across 11 editions worldwide.

The book serves as the first ever “hemp bible” and documents the long, complicated, and forgotten history of the hemp plant, covering both its medicinal, commercial, and industrial uses. Jack also uses the book to shine a sarcastic light on some of the biggest events in hemp/cannabis prohibition, and basically laid down the groundwork for most legalization campaigns that still exist today.

The book also explores in detail one of Jack’s biggest passions; the use of hemp fuel. It proposes the idea that hemp oil could literally power all of the world’s energy, offering a viable solution to global warming, deforestation, and pollution and virtually saving the planet. The book also comes with a $50,000 offer to anyone who thinks they can prove Jack wrong.

THE DEATH OF THE EMPEROR

In 2000, Jack suffered a minor heart attack and stroke that left him with speaking difficulties and affected his ability to move the right side of his body. However, he mostly recovered from the incident, claiming the use of a psychoactive mushroom (amanita muscaria) as the “secret” to his recovery.

Unfortunately Jack suffered another attack in 2009, the complications of which lead to to his death in 2010.

Jack Here is undeniably one of the most iconic faces behind the cannabis legalization movement. Sensi Seeds even created a powerful sativa/indica strain in memory of Jack which has gone on to win the hearts of many. The name of this strain? Of course it's 'Jack Herer'.

It goes without saying that Jack received his fair amount of criticism as well. European experts on hemp like Dr. Hayo M.G. van der Werf, for example, openly criticized some of the arguments/facts presented in Jack’s book.

But, regardless of whether you side with Jack or not, it’s important to recognize the passion that he shared for cannabis and hemp, and how this passion lead him to open the public’s eye to hemp/cannabis and it’s long relationship with mankind.

How To Grow Cannabis With Drip Irrigation