Recipe for cannabis coffee: a perfect match or absolute opposites?

The caffeine in coffee may enhance the strength of a cannabis high, allowing users to use less weed for the same result. But researchers aren't all positive.

Cannabis and coffee seem like absolute opposites. Coffee stimulates and weed sedates. Some researchers believe that caffeine may enhance the strength of your cannabis high, while other researchers don't think mixing the two is the best idea.

The cannabis industry is constantly moving forward thanks to the seemingly endless innovation and creativity that is turning its wheels. Almost every food and drink item imaginable can be medicated and infused with cannabinoids these days, and this includes coffee.

At first glance, the combination of these two substances may seem counterproductive. Mainly because coffee is known to be a psychoactive drug that can cause an increase in alertness due to its stimulating properties.

Cannabis, on the other hand, is known relax users because of its sedating and calming properties. Wouldn’t combining both of these substances cause them to cancel each other out?

Well, it turns out that there are good and bad aspect in combining these two much loved stimulants.

ANIMAL RESEARCH ON COFFEE AND CANNABIS

A 2011 paper published within the journal Behavioural Pharmacology documented a study in which both THC and caffeine were administered to a squirrel monkey.[1] The researchers concluded that the caffeine enhanced the effects of the psychoactive high catalysed by the THC. The authors of the paper state, “Drugs like caffeine potentiated the effect of threshold doses of THC, causing a reinforcing effect”.

Based on this animal research, sipping a cup of coffee along with a joint may actually require you to smoke less cannabis in order to reach the same psychoactive effects. However, research in this area is very young, meaning this shouldn’t be taken as solid fact that will apply directly to your cannabis smoking habits.

A GOOD COMBINATION OR HARMFUL HABIT? 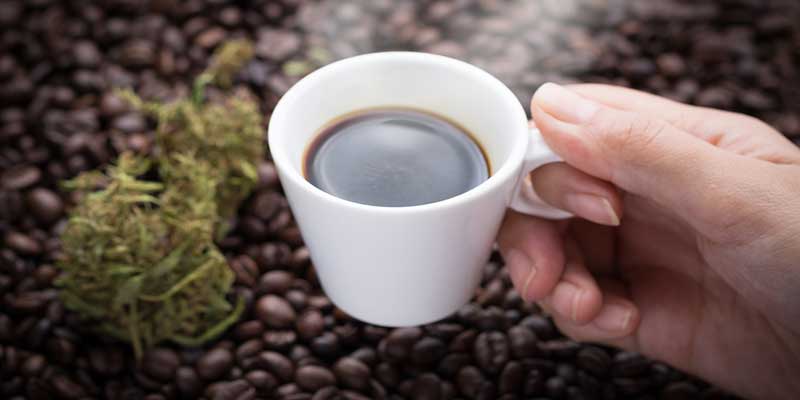 The act of mixing the stimulating effects of coffee with the relaxing and sedating effects of cannabis seem to be a topic of debate. Some people seem to thoroughly enjoy this combination, and it may very well make up part of their morning routine.

Dr. Sergei Ferre, a senior investigator at the National Institute on Drug Abuse, told Live Science in an interview that “Caffeine increases the effects of a psychostimulant tremendously, including THC and cocaine”, adding, “So, any substance that releases dopamine, including THC, it’s effect are increased by caffeine”.[2]

So, it appears that caffeine may indeed serve to boost the effectiveness of THC when consumed in tandem. Caffeine on its own is known to boost the neurotransmitter dopamine, also known as the feel good chemical, an action that THC also achieves. So it is no wonder that many users like to combine both of these substances.

However, some researchers have mixed feelings about this combination, and believe that there is not enough research at this current time to decide whether or not these substances are safe to take together.

Krakower states that caffeine and THC in combination may worsen a person’s working memory and may have a compounding effect when taken together that is not optimal, mentioning that the effects of the combination are potentially harmful.

RECIPE FOR A PSYCHOACTIVE COFFEE

The science so far has no real clear answers, leaving person and anecdotal accounts to fill in the gaps. If you are a person who really does enjoy a cup of coffee with a joint during the day, then there is a way to take this to the next level and medicate your coffee to get both effects from a single drink. Cannabis infused coffee.

N.B. The following recipe is made with an estimated amount of marijuana. Remember that edibles can hit harder than you expect, so feel free to judge the amounts according to your own experience. It is strongly advised to first learn how to calculate the strength of edibles.

To begin, grind up for cannabis as finely as you can. Using a multi-chambered cannabis grinder is best for this, as the plant matter filters through and becomes smaller as it passes through each chambers. Alternatively, a very sharp pair of scissors will suffice. The smaller the cannabis, the greater the surface area will be exposed.

Next, pour the 3 cups of water into a pan and bring the water to a rolling boil.

Now, add two tablespoons of the butter or coconut oil that you have elected to use into the water. Both coconut oil and butter are great sources of fat, and since cannabinoids such as THC and CBD are fat soluble, these fat sources are needed in order to absorb the cannabinoids.

Proceed by adding your finely ground cannabis into the pan.

Allow the mixture to boil for approximately 40 minutes, enabling the cannabinoids to extract into the liquid. Stir the mixture every now and then.

Use a fine sieve or a piece of cheesecloth to strain the mixture into another container. Allow the liquid to seep through as the plant matter is left behind and out of the new container.

The strained liquid can now be used to max a coffee. Use a blender to mix the coffee in order to prevent the fat source form rising to the top of the mug.

Add vanilla or honey to taste.

Can cannabis help the elderly?