Legal pot is often associated with lower crime rates. However, is that really the case? Click here for more information on legal weed and crime.

One of the biggest premises legalize marijuana supporters use to fuel their argument is the promise of lower crime rates. And the argument seems pretty plausible, especially at a glance:

As pot is legalized, drug-related crimes for the sale, possession, cultivation, and consumption of cannabis are obviously expected to drop significantly.

Furthermore, many sources claim that the legalisation of medical marijuana would help neutralize organized crime activity involved in selling the drug illegally. However, is that really the case?

The answer, unfortunately, is far from clear. 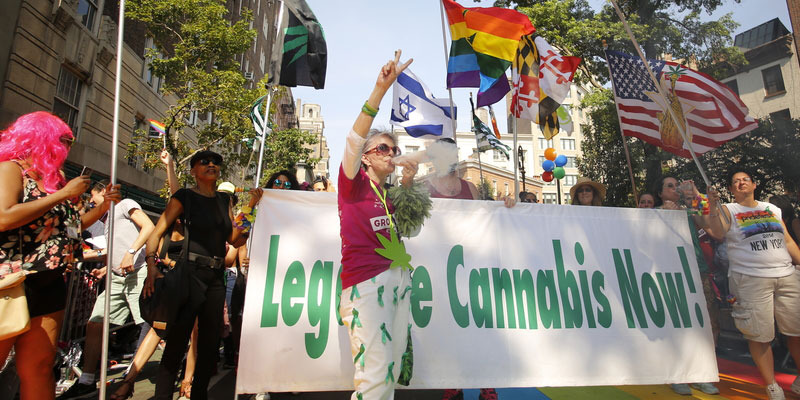 There’s a strong body of evidence that suggests the legalisation of cannabis reduces crime.

One strong piece of evidence came from a research article published by researchers from the University of Texas, which examined the effect of legalized medical marijuana on crime rates.[1]

The study, conducted by UT associate professor of criminology Robert Morris and colleagues, looked at crime rates from all 50 states in the US between 1990 to 2006, by which point 11 states had already legalized medical weed.

The researchers focused primarily on the relationship between legalization and rates of crimes like homicide, rape, robbery, aggravated assault, burglary, theft of personal property and cars.

The researchers used data from a number of sources, including FBI Uniform Crime Reports and the census (among others), and made sure to control for factors like poverty levels, employment and education statistics, and even beer sales per capita.

Another argument favored by supporters of the legalization movements is this; legalizing cannabis will help reduce organised crime levels related to cultivating, processing, and selling the drug illegally.

Related Article
Could Legalization Give New Hope To Cannabis Convicts?

Once again, the argument seems very logical; curb the demand for illegal cannabis in the US by legalizing the drug and you essentially leave organized crime units (like Mexican cartels) out of business.

And, recent evidence suggests that may actually be the case.

A research article published in The Economic Journal in June 2017 specifically examined the effect legal cannabis had on Mexican drug trafficking.[2]

The researchers behind this study relied on statistics from the FBI’s Uniform Crime Reporting Program and focused specifically on analysing crimes in states bordering Mexico.

The study focused on violent crime rates in these states, like homicide, assault, and robbery. The results showed that changing cannabis laws in the US were linked to a 12% decrease in these kinds of crimes.

Moreover, by analyzing data from the FBI's Supplementary Homicide Reports, the researchers concluded that drop in homicides in these areas was largely due to a decrease in drug-related killings.

The researchers also noted that these effects were most pronounced in areas closest to the Mexican border, and that legalization in inland states may “spillover” and subsequently cause a reduction in crime in the closest border state.

Another recent research paper (published in the Journal Of Urban Economics in July 2017) suggested that closing legal marijuana dispensaries led to an increase in crime in the immediate area where the dispensary operated.[3]

The paper, written by Tom Chang of the USC Marshall School of Business and Mireille Jacobson of the Paul Merage School of Business at UC-Irvine, analyzed statistics in Los Angeles to examine whether there was a relationship between the opening/closing of dispensaries and crime rates in a specific area.

The authors observed that when a dispensary closed in an area, crime rates increased in the immediate area where the dispensary operated, especially property crime and theft.

They noted that the same thing happens when restaurants close, and suggested that cannabis dispensaries, like restaurants and other businesses, help attract people to a certain area and ultimately reduce crime by making the area more trafficked. 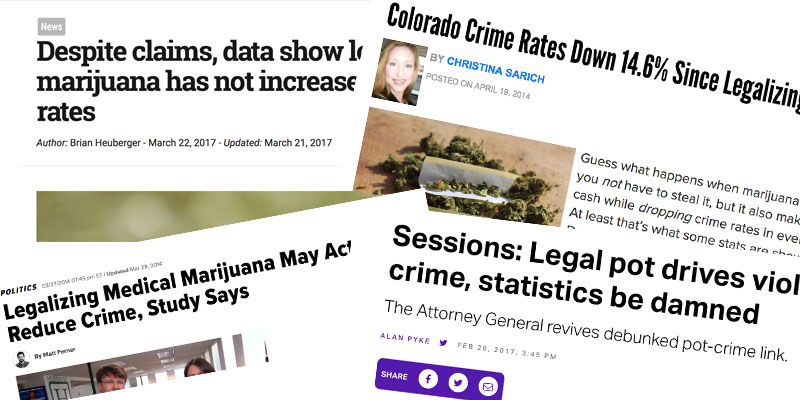 However, it’s important to note that the news for the effects of legalization on crime isn’t all positive.

Colorado is often cited as a prime example of a legal cannabis marketplace. Google search crime rates in Colorado after legislation and you’ll quickly find countless sources claiming crime in the state has decreased significantly since it legalized pot.

However, those statistics seem to be a little detached from the reality.

Analyzing statistics from the Denver Police Department (subsequently based on figures from the National Incident Based Reporting System for Denver), Kevin A. Sabet showed that crime in Denver was actually on the rise a year after legalization.

“The Denver Police statistics show that summing across all crime types — about 35 in all — the crime rate is up almost 7 percent compared with the same period last year. Interestingly, crimes such as public drunkenness are up 237 percent, and drug violations are up 20 percent,” writes Sabet, author, consultant, advisor to three U.S. presidential administrations, and assistant professor.[4]

In his article, Sabet also notes that the legalization of cannabis in Colorado has lead to an increase in butane explosions (as a result of the production of concentrates like BHO), increased calls to ER’s from users experiencing unpleasant side-effects from cannabis use, and more.

Finally, the black market for cannabis in Colorado has far from dissolved. In fact, some would argue that the legalization of cannabis has had little effect on illegal drug trafficking, seeing that drug cartels are still able to move the product cheaper than the state (mainly due to taxing).

CANNABIS AND CRIME: THE FINAL VERDICT

Coming to a concrete conclusion about the relationship between cannabis and crime is far from easy. As we’ve seen, there is a strong body of evidence supporting both sides of the argument, as well as some strong criticism of this evidence.

However, one thing that is certain is this; legalizing cannabis is a complicated process, and finding the best way to integrate marijuana back into our society is going to take time.

Hopefully, with constant analysis of legalization efforts in places like Colorado, other US states, as well as countries like Uruguay, the Netherlands, and Spain, we’ll find the solution in the near future.

Weed and propaganda in classic cartoons

Can you get high in space?

Children’s books about cannabis? Educate them while they're young.