Children’s books about cannabis? Educate them while they're young.

Children's books about cannabis are suddenly becoming popular. Parents are looking for ways to explain a new cultural phenomenon to their own kids.

Cannabis and kids books?! Really?! Well, it was inevitable, actually if you think about it.

Popular children’s books manage to find the hotspot of cultural debate. This has always been the case. There is a child in everyone.

Mass produced children’s books are also approved by the same people who control the adult markets. This is nothing new and started in Mainz, Germany. The first home of the commercial publishing industry circa Johannes Gutenberg.[1] Ultimately, publishing houses still are making similar kinds of decisions. The Internet, however, has a revolutionary impact on this world too.

Many children’s book authors have also faced censure as their stars have climbed. Many have even admitted that their books were not really about children. Or were about childhood experiences that are still stigmatized.

Related Article
How To Handle Teenagers And Marijuana Use

Both books had the distinction of being subsequently frequently banned. A Story, A Story was the first commercial depiction of a black god in American mass-market publishing. Let alone children’s books. In the American South, in particular, the idea of a higher power of a different color is actually worse than the idea of teaching your children about sex. The high rate of both teen pregnancy and incest regionally is a testament to the success of that strategy.

Into this turgid drama of a business now comes a new theme.

And further when the U.S. is facing an unparalleled prescription drug and painkiller epidemic.

The irony? The guy who started this trend wasn’t intending to create books for kids.

At least this time, the author is being honest. In his wake has come a whole book list of similarly themed projects.

The good news? These might be banned in schools too, but that doesn’t matter. Parents are going to be reading this stuff just for the fun of it. The kids come along for the ride.

WHO ARE THESE CANNABIS KIDDIE AUTHORS? 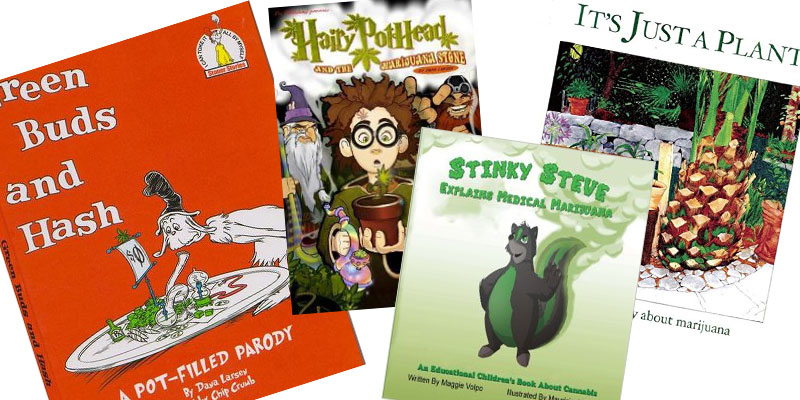 One of the best known if not best publicized so far is Dana Larsen. His day job is as a real world cannabis activist. In Canada, of course. He has also been making some green of his own in the book business for years. His titles include parodies like Green Buds and Hash. Some know him for his other classics like Hairy Pothead and the Marijuana Stone. His adult fans are so enthused, however, that they have begun reading these books to their own children. Particularly if they are medical users.

In turn, this is starting a noticeable trend.

And normalization of the plant has taken a new step. As the saying goes, “get them while they’re young.”

Part of the appeal of Larsen is the satirical references to other children’s books. Part of it is that children’s and teen lit is a great place to explore other cool themes that fit into this. Magic. Exploration. Science.

This will be a richly themed vein for years to come.

It is also already starting a definite cottage subculture.

Related Article
Can You Be Too Young To Try Pot?

Maggie Volpo has turned out to be a similarly prolific themed author. The Stinky Steve series features a green skunk who gives the dope on the weed. These are in fact designed for kids. Even for kids in trouble. Like having a parent in prison on a cannabis charge.

It’s Just a Plant: A Children’s Story about Marijuana is another entry in this general theme. Written and illustrated by Ricardo Cortés it is also fairly straightforward. It is the story of a young girl who learns about the plant from different authority figures. Her parents. A farmer. A police officer. A doctor.

Morgan Carman has also ventured directly into the children’s book field with a series. Anamorphic characters have adventures that begin in Jamaica, with tours of Hemp Island. 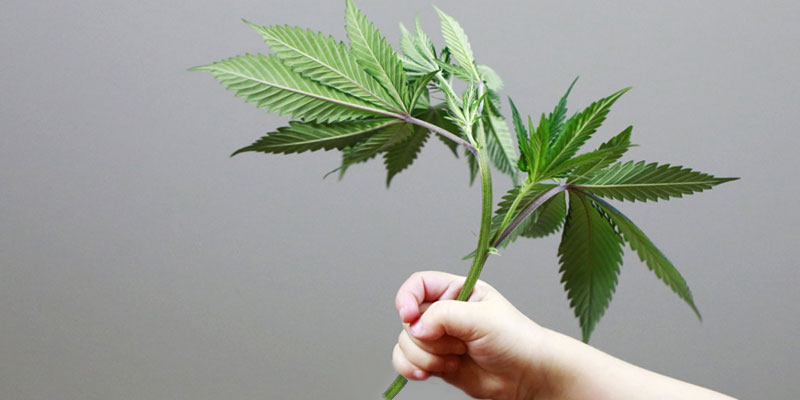 Controversial or not, cannabis is being mainstreamed. Even better, people are actively looking for ways to explain many things about the plant in a more simple way. Including to their children. Medical users, for example, need easy-to-understand ways to explain their strange medication. Recreational users who are also parents get tired of smoking in secret.

Marijuana is also becoming accepted quickly by Millennials looking for culturally relevant stuff for their own kids. When it comes to drugs if not cannabis in particular, the Boomers just don’t provide enough answers.

Cannabis is no longer a sign of counter cultural hipness. It is also simply medication. In a situation where there is a relatively fast cultural change like this, it has to be explained.

Starting with and to children.

Much like “the world is flat” science, in 20 years, prohibition will look as quaint as other discarded ideas. Science will continue to prove medical efficacy and eventually recreational users will win this battle too.

The place that foretells that future most clearly now? The pages of pot-themed children’s books.

Is it safe to give CBD to children?

10 Tips to keeping your stash away from children

Why many women are swapping their wine for weed

Kief: what it is, how to make it, and how to use it

15 most ridiculous quotes about 'marihuana' by Harry J. Anslinger