The vaporizer: What it is and how to use it

The consumption of cannabis Vaping

Vaporizing cannabis is a technique that has been used for a few centuries already, but is currently undergoing a massive resurgence in popularity – largely thanks to advances in technology and advances in the understanding of cannabis’ interactions with the body.

A vaporizer is a device used to heat cannabis to the point where its active compounds, such as cannabinoids, boil and vaporize out of the herb as a vapor, as opposed to combusting them and inhaling them as a smoke.

To delve into the more nerdy and scientific stuff, vaporizers perform this function in one of two ways: conduction or convection. These may seem big words, but the main difference is that in conduction vaporizers, cannabis is in direct contact with the heating element. Inversely, for the convection method, bud is separated from the heating element relying on heating the air around it to produce the desired effects.

Of course, there are respective advantages and disadvantages with making use of each method. The good thing about conduction vapes is that the herb is easily heated up, which makes it ready to use within seconds. The problem with them is that direct contact comes with a high risk of causing combustion if not controlled properly – which means smoke instead of vapor.

If you want a more pure, reliable vaping method, then convection is the way to go. The only downside of it is that it can be more expensive due to the more complicated machinery and that it can take a while to heat up.

THE HISTORY OF VAPORIZING: A 1400-YEAR-OLD PRACTICE 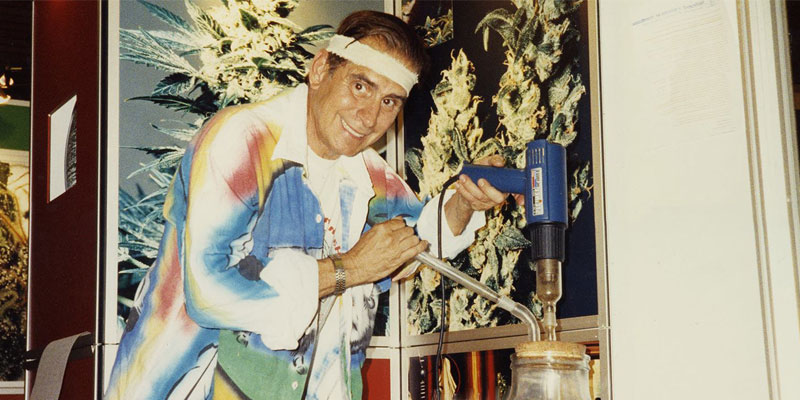 Vaporizing was practised even before the modern age of technology came into existence. It was first notably introduced into the public consciousness 1400 years ago by Irfan Shiekh of the Moguls, which is Afghanistan as we know it today.

A member of Safavid Dynasty, he invented the “Hookah”, the first vaporizer most commonly known as a waterpipe. In their circles, it was either called the “narghile”, “arghila”, or the “shisha”, which is still in existence in many Persian-themed restaurants at present day.

The Americans developed the first electronic cigarette in 1927, and was further developed into the modern-day e-cig in 1960. But it was around 1994 when Cherokee marijuana medicine man Frank William Wood, better known as “Eagle Bill Amato”, introduced the cannabis vaporizer, to promote the use of a much safer method of consumption. The said idea was handed down to him in 1993 by a grower from California, who made use of a heat gun to vaporize.

Eagle Bill’s device became a major attraction at the Hash Museum in Amsterdam for more than a decade. At the time, he was already living in Amsterdam for 12 years, and he was able to entice museum visitors from around the world to try out his new technology.

His vaporizer became a massive hit, and had won him numerous first place honors at the annual Cannabis Cup. Soon enough, Bill became a regular at the Hash Museum, and was able to make vaporization one of the staple methods of cannabis consumption around the world.

THE ANATOMY OF A VAPORIZER

Vaporizers come in all forms, shapes, and sizes, but for the portable ones that are commonly used, the set-up is pretty much the same across the board. For electric vaporizers, there will be a rechargeable battery in place, a heating chamber (which is also referred to as the atomizer), a bowl wherein the buds are placed, and a mouthpiece.

Butane vaporizers are structured the same way, except that they are not battery-powered, instead relying on a flame to heat the chamber.

HOW TO: MAKING THE MOST OUT OF YOUR VAPORIZER EXPERIENCE

Most modern vaporizers come with a “plug and play” set-up; the basic premise is that you put your bud in the chamber, heat it to the desired temperature, and inhale – simple as that. There are some measures to follow in order to make the most out of your experience.

First of all, make sure that you have just the right amount of bud in the bowl, and you can make use of your trusty old grinder to help you out with that. Using too little will vape the load off too quickly, while using too much makes airflow and even vaping hard.

Another important thing to remember is to not overuse your herb. The remnants of the ground bud after use should be more brown, and not blackish and almost burned to a crisp. Know when it is time to discard the buds and replace it with a new load.

Vaporizers come in many variants that you can choose from and give you some option paralysis. But these variants are mainly comprised of two options: desktop and portable.

If you want to go coffee shop style and get the most vapor smoke out of your bud, go with a desktop vaporizer. Desktop vaporizers offer greater power, higher ranges of temperatures, and often more complex technology. They can also be quite versatile in the way that they are used – for example, some models allow the use of an airbag that you can fill with vapor, in addition to their main mouthpiece.

The portable variants are for those who choose to be stealthy with their vaping, or want to vape on the go. The standard portable vaporizer is about the size of a liquor flask, but comes in different styles.

Its subset, the pen vaporizer, is a lot smaller and sleeker, and as its name suggests, is shaped like a pen. The main difference between the two is that the standard vaporizer holds a slightly bigger battery, which also offers a longer power life.

Both a desktop and portable vaporizer can make use of dry herbs, liquid cannabis, or other concentrates, depending on the model.

Related Article
How To Decide Which Vaporizer Is Right For You

THE ADVANTAGES OF VAPORIZING

Better for your health

The use of vaporizers is widely considered as the healthier method for cannabis consumption. While the smoke from your go-to joint, blunt, or apple pipe may not have the same harmful effects brought on by cigarette smoke, its carcinogenic qualities emitted from the burning plant remain present. With vaporizers, you get to enjoy the benefits of cannabinoids, without many of the pitfalls of smoke.

While getting to enjoy the full effects that cannabis has to offer, vaporizers also allow you to savor the full flavor of your bud. Since the device is not turning the herb into instant ash, unlike smoking, you can get to relish that Mango Kush taste on your lips.

The best part about it is that you can get the maximum hit of its effects, as vaping allows you to consume up to 95% of the cannabinoid content. Given the amount of cannabinoids you are able to consume, vaping also gives a stronger kick compared to smoking.

While a vaporizer may require you to shell out a generous chunk from your savings, owning one can actually save you a lot of money in the long run. Because of the stronger effects rendered from vaping, the consumption of your buds is also lowered as well. In fact, studies have shown that even heavy smokers use up 30-40% less weed when done via vaporizers. Talk about getting a bang for your buck.

Related Article
What Are Vape Pens And How Do They Work?

THE DISADVANTAGES OF VAPORIZING

Unlike a simple joint, a vaporizer is a permanent fixture. As such, you will need to clean it every now and again to keep its airways clear and keep the taste fresh.

Although getting much better with each generation of vaporizers, you still have to wait a minute or so for most vaporizers to heat up – it doesn’t sound like much, but for some stoners, this is too long a wait compared to simply just sparking up.

Vaporizers, especially good ones, can be quite expensive to buy initially. While they save you money in the long run, you need those initial funds to buy one. For some, it can be too large an investment.

Overall, it can be argued that vaporizing is the best thing to ever happen for cannabis consumption. While it will ultimately still be a matter of preference, it cannot be denied that this age-old technology can still continue to evolve, and will be here to stay for the decades – even centuries – to come.