How cannabis use affects sleep and the ability to dream

Sleep is fundamental to human health. Both deep sleep and REM sleep play important physiological roles. Limited research has found that THC reduces the amount people dream. Is this anything to be worried about? Or can we sleep easy?

We spend over 25% of our lives tucked into bed, asleep. At times, sleep can seem like an inconvenience to our busy and hectic lives. But without it, we’d be in an awful state indeed. Many substances we take can affect the quality of our sleep. We all know that a cup of coffee will make it harder to doze off, and a mug of valerian tea will add a touch of sedation. When it comes to cannabis, users report different effects.

Although cannabis appears to help people get to sleep, the plant might disrupt the normal sleep cycle. Many cannabis lovers state that they dream less while smoking frequently, and limited research suggests that THC reduces REM sleep.

Let’s take a more in-depth look into the nature of sleep, and where cannabis fits into the picture.

THE 3 STAGES OF SLEEP 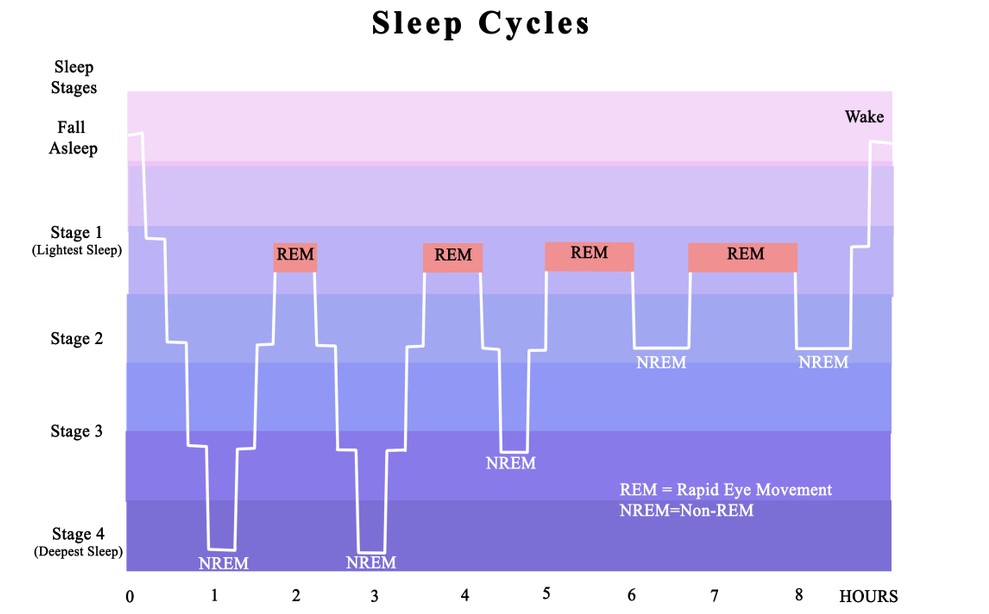 There are essentially three phases of sleep: superficial sleep, deep sleep, and REM sleep. These phases are further broken down into five different stages (1–4 and REM), each of which is more profound than the last.

Stage 1 non-REM is very light sleep. Stage 2 is characterised by a slightly deeper sleep where the heart rate begins to slow down. Stage 3 and 4 are defined as a deep and restorative type of sleep. Muscles relax, and the body starts to repair and build tissues.

During an average night's sleep, we progress through these stages cyclically; we start at stage 1, work our way up to the REM stage, and then start all over again.

During the first few cycles, we generally spend more time in the deep sleep phases and less time in the REM phase. However, later on in the night, REM sleep periods tend to increase in length while deep sleep time decreases.

Passing through all of these phases takes roughly 90 minutes. According to Dr Hans Hamburger, neurologist, somnologist, and head of Holland Sleep Research, an average sleeper will pass through this cycle 4–5 times every night.

The REM sleep period is where most of our dreaming occurs, explains Dr Hamburger.

During this dream-rich state of consciousness, many interesting processes occur in the brain. REM sleep plunges our body into a state very similar to when we’re awake. The brain becomes almost as active, breathing becomes faster, and changes in body temperature and blood pressure occur.

The science of dreaming isn’t completely understood. REM sleep plays a role in central nervous system development, learning, and memory. However, the purpose of the visual nature of dreams is still a topic of debate. Some researchers believe dreams play the role of a therapist and enable people to confront certain emotions. Others believe dreams are a form of fight-or-flight training, as the amygdala is most active during REM.

THE EFFECTS OF CANNABIS ON THE REM PHASE 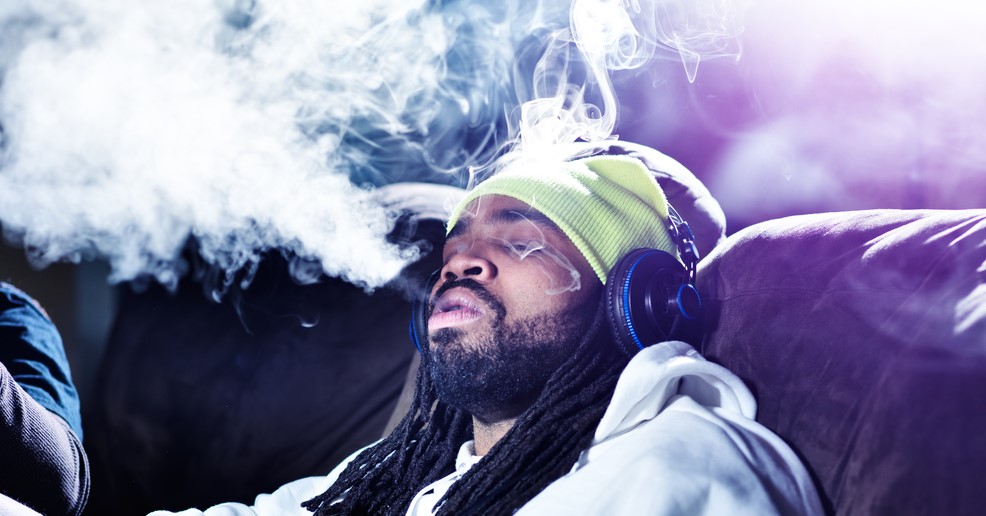 Anecdotally, cannabis users tend to experience a lack of dreams when they use the herb heavily. There’s not much research that explains why this may occur—scientists have only taken a brief dive into the subject.

A study conducted in 1974 and published in the journal Psychopharmacologia looked at a small sample size of five volunteers who slept in a laboratory for 8–15 consecutive nights. Each subject received a 20mg dose of THC before sleep. Researchers monitored their brain activity and eye movement throughout the night, ultimately finding that THC decreased the amount of time spent in REM sleep. The researchers also tested the effects of withdrawal from THC for 4–6 consecutive nights. Subjects experienced mild insomnia, and there was no marked recovery in REM sleep.

One year later, a supporting study yielded similar results. Researchers recorded the brain activity and rapid eye movement of experienced cannabis users who received either THC or placebo. Researchers found that the administration of THC significantly reduced eye movement during REM sleep. There was also a decrease in the duration of REM sleep. During the withdrawal stage, eye movement and REM duration increased. Outside of THC’s impact on REM sleep, the study also found that stage 4 sleep duration increased with THC. The same stage of sleep decreased during withdrawal, but only during the first night.

Several other studies conducted around this time found similar results, but the jury is still out on the matter. Higher-quality research using larger sample sizes and the administration of full-spectrum extracts would increase reliability. For these reasons, the evidence remains inconclusive.

He also claims that he and a colleague from the Wayne State University School of Medicine found evidence that contradicts the popular opinion that cannabis suppresses REM sleep.

Roehrs claims that there was no difference in the amount of REM sleep in the patients when smoking active cannabis or placebo.

DOES CANNABIS STOP YOU FROM DREAMING?

As of yet, there’s no clear answer to this question. According to the limited research, THC appears to affect brain activity and eye movement, signifying a reduction in REM duration. In contrast, more recent research performed by Roehrs contradicts these findings.

Scores of anecdotal accounts report reduced dreaming after heavy cannabis use. Combined with older research, this makes it plausible that THC reduces REM in some individuals. It’s likely that THC—and cannabis as a whole—affects different people in different ways. It’s a chemically complex plant, and each strain features varying levels of cannabinoids and terpenes that may impact sleep. Furthermore, variables such as time spent sleeping and the use of other substances may also play a role.

CAN QUITTING REGULAR CANNABIS USE MAKE YOU DREAM MORE?

Many cannabis users who report a decrease in dreams also experience a revival in the experience when they abstain from the herb. Research has coined this phenomenon “the rebound effect”.

Unfortunately, this is another under-researched area of interest. The 1975 study mentioned above found that REM duration increased during the withdrawal phase. Whether this is due to chemical changes or disrupted sleeping patterns is yet to be confirmed.

Roehrs has stated that cannabis users might experience the same amount of REM, but withdrawal simply helps them remember their dreams. It's only possible to recall a dream if a person wakes up mid-REM phase. Roehrs raises the possibility that withdrawal leads to disrupted sleep, increasing the chances of a person waking up during this phase.

WHICH COMPOUNDS IN CANNABIS CAN POTENTIALLY AFFECT SLEEP?

Cannabidiol (CBD) is one of the most common cannabinoids, second to THC. Although it promotes relaxation, researchers widely regard the molecule as non-psychotropic. This trait—along with anti-inflammatory, anxiolytic, and neuroprotective effects—has made CBD an extremely popular therapeutic agent.

Scientists have explored the sleep-promoting effects of CBD in several human studies. A study published in The Journal of Clinical Pharmacology documents the effects of CBD on insomniacs. Subjects received CBD in a dose of 40mg, 80mg, 160mg, placebo, or 5mg nitrazepam (an anxiolytic agent). Subjects who received 160mg of CBD reported a significant increase in sleep compared to placebo. Interestingly, all three doses of CBD were associated with significantly less dream recall.

CBD may also improve sleep in populations diagnosed with anxiety. Generalised social anxiety disorder (SAD) is associated with disruptions in the sleep-wake cycle. Interestingly, clinical trials have shown CBD to significantly decrease symptoms of the condition.

Terpenes are another component of the cannabis plant that are showing promise in the domain of sleep enhancement. These molecules are responsible for the unique tastes and smells of individual cultivars. For example, myrcene—one of the most abundant cannabis terpenes—produces scents of earth and cloves. The terpene is widely found in “stoning” cannabis varieties, and produces sedating effects that might help to improve sleep.

All of the published research on cannabis and sleep has examined individual molecules. However, emerging evidence is showing that constituents such as cannabinoids and terpenes work better when administered together—a phenomenon known as the entourage effect.

Dried cannabis flowers provide an entire bounty of promising chemical constituents. Research hasn’t looked at the effects of specific strains on sleep, but strains like Blue Mystic and Vanilla Kush are known for their relaxing and sedating properties.

Current scientific evidence suggests that certain cannabinoids may improve some aspects of sleep. However, until research institutions conduct large-scale clinical trials, we won’t know for sure.

With that said, the lack of evidence doesn’t take away from consistent anecdotal accounts. Many cannabis smokers claim that the herb eases their mind and effectively lulls them to sleep in the evening; this is supported by studies that demonstrate the anxiolytic and insomnia-reducing properties of certain cannabinoids and terpenes.

We also know that THC has the potential to reduce REM sleep, a phase of the sleep cycle linked to critical physiological processes. These findings complicate the matter; cannabis for sleep is a topic rife with nuances.

5 tips to safely test the potency of cannabutter and edibles

Does the use of rolling paper affect your health?