Can cbd ease symptoms of menopause?

Is CBD a woman's best friend during menopause? Read on to find out the links between menopause, the ECS, and cannabidiol.

Menopause is a natural part of the aging process, and marks the endpoint of menstruation in women. It's a perfectly normal process, but can be a challenging time in a woman's life. Menopause can cause an array of symptoms, both physical and psychological. Conventional treatments during this time include hormone replacement therapy, cognitive behavioral therapy, estrogen creams, and lifestyle changes. Could CBD play a role in easing menopause symptoms?

WHAT IS MENOPAUSE AND HOW DOES IT AFFECT WOMEN?

Menopause occurs approximately 1 year after a woman's last period. It's caused by a shift in hormone production as the body ages. In younger women, the ovaries produce higher levels of estrogen. Once menopause has set in, lower levels of estrogen mean women can no longer get pregnant and won't experience monthly periods.

Women can begin to experience symptoms of menopause several years before their last period. This point in time is known as perimenopause, and usually occurs between the age of 45–55. However, premature menopause can occur at any time in a woman's life without any known cause.

Perimenopause causes an array of symptoms. One typical sign is the irregular timing of periods, as well as heavier or lighter bleeding. Hot flashes are another common symptom. These involve a sudden feeling of warmth all over the body or in specific areas. Hot flashes tend to last between 30 seconds and 10 minutes and occur around 1–2 years after a woman's last period.

The symptoms of menopause and perimenopause are not purely physical. This major shift usually has psychological repercussions too. The reality of aging and losing the ability to birth a child can come as a shock to some women. Depression, irritability, and mood swings can emerge from this realization.

CAN CBD HELP WITH MENOPAUSE?

Cannabis as a potential solution for these symptoms may seem unlikely, but we’re not suggesting menopausal women should spend their days stoned. Cannabis contains hundreds of chemicals, many of which are non-psychotropic. CBD is one such molecule derived from cannabis that has found its way into the legal supplement market. CBD works in a broad fashion by influencing receptors located throughout numerous physiological systems, including the endocannabinoid system (ECS). The ECS plays an important regulatory role and helps to maintain homeostasis. It has a large influence on mood, immunity, pain, sleep, and fertility.

It’s not just phytocannabinoids like CBD that influence the ECS. Cannabinoids created by the body, called endocannabinoids, are signalling molecules tasked with regulating this system. The endocannabinoid anandamide, also known as the “bliss molecule” for its association with elevated mood, plays an important role in ECS function. Estrogen is known to increase levels of anandamide. However, as levels of estrogen drop during menopause, so do levels of this happy chemical. This is one reason for the fluctuations in mood experienced during menopause.

With this in mind, let’s find out what the research suggests about CBD’s potential for easing symptoms of menopause.

Depression and anxiety are common symptoms of menopause. A change in hormone production and the reality of age-related changes can have a serious impact on anyone’s mood. Whilst medication and lifestyle changes are often prescribed to address these issues, researchers are looking into how CBD may be used in a similar fashion.

In preclinical and clinical settings, research has shown that CBD may effect anxiety by shifting activity in brain structures such as the limbic system. The cannabinoid also elevates levels of anandamide by blocking its reuptake at the CB1 receptor site.

CBD doesn’t only produce its effects by way of the ECS. The molecule also targets the serotonin receptor 5-HT1A. In doing so, researchers believe that CBD may reduce negative mental states such as anxiety.

Loss of bone density, a condition known as osteoporosis, can occur during menopause. Bone naturally becomes less dense during the aging process, but there is a distinct correlation between decreased estrogen levels and osteoporosis. This is why the condition is far more prevalent in females. When this condition develops, women are predisposed to fractures, spinal deformities, and back pain. That said, studies suggest CBD may induce enhancement of bone density and toughness. There’s not much human research in this domain, but in vitro and in vivo experiments have yielded promising results.

Bone density is maintained by a close balance between two types of cells: osteoblasts and osteoclasts. The former work to lay down fresh bone tissue, whereas the latter strip down old bone. When estrogen levels drop, osteoclasts become more active. This means bones are broken down faster and gradually become less dense. Interestingly, CB2 receptors are present on both osteoblasts and osteoclasts. Stimulation of this receptor is linked to bone proliferation, rendering it a potential target for the treatment of osteoporosis. CBD has been shown to be an inverse agonist of this receptor site, making it an intriguing point of research in the domain of osteoporosis. 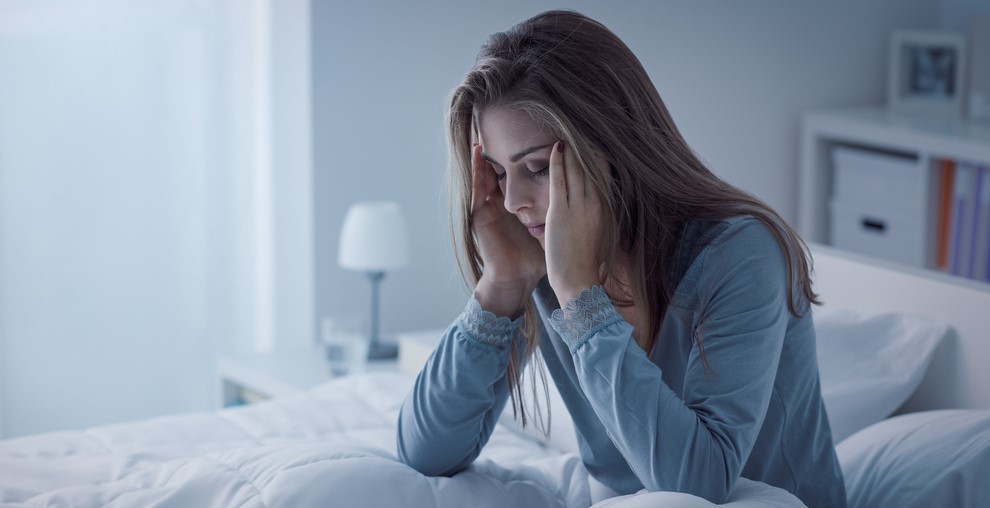 Women experiencing menopause often struggle to fall asleep at night. This can be caused by feelings of anxiety, depression, and hot flashes. Uncomfortable in the short-term, these symptoms can eventually lead to fatigue and exhaustion. Can CBD help tame anxiety and stress at the root of this disruption? Given the cannabinoid’s ability to increase levels of anandamide, which has been found to exert sleep-inducing effects, as well as the above studies on CBD for reducing anxiety, here too it is an intriguing candidate.

Pain can manifest in various forms due to menopause. Fluctuations and decreases in estrogen can result in cramps, breast tenderness, migraine headaches, joint pain, and pain during sexual intercourse. Topical CBD balms and lotions have been created for these very purposes.

Although no research has been conducted specifically on CBD and menopausal pain, there are numerous studies boasting an advantageous relationship between CBD and various types of pain.

Related Article
The Difference Between CBD Oil And Cannabis Oil

CBD AND MENOPAUSE: A FINAL WORD

What Is CBD? Everything You Need To Know

How to make cbd oil at home

The 3 most popular cbd extraction methods

How to grow organic cannabis at home