Can cbd help with opioid addiction?

Opioids are a highly addictive form of pain medication. They are effective at easing physical suffering, but subsequent dopamine release can easily lead to dependence and addiction. Can CBD help people put the pills down for good?

Chronic pain is a significant contributor to human suffering—approximately 20% of the adult population experiences the condition. Numerous ailments result in chronic pain, from musculoskeletal disorders and irritable bowel syndrome to fibromyalgia. Although the cause varies, the treatment is often identical: opioid pain medication. Could CBD offer an alternative?

Opioids are effective at alleviating pain, though doctors notoriously overprescribe them. The pain-relieving and pleasurable effects of these chemicals also makes them highly addictive, which often leads to abuse. According to the National Institute on Drug Abuse, 21–25% of patients who are prescribed opioids end up abusing them, and 8–12% develop opioid use disorder.

Opioid addiction can lead to a transition to illicit drugs, with 4–6% of users switching to heroin. Opioids are also inherently dangerous. High doses affect breathing and heart rate, and overdose results in more than 130 deaths per day in the United States alone. All of these factors have given rise to the so-called “opioid crisis.”

Addiction to opioids is a chronic disease; one that affected approximately 1.7 million US citizens in 2017. Conventional treatment for the condition includes counselling and the prescription of other addictive drugs.

Alternative treatment options are required, and in this realm CBD is being implicated for its versatile effects on the body. Let’s explore precisely how opioids work, and then check out how CBD might be able to help.

WHAT ARE OPIOIDS AND HOW DO THEY WORK?

Opioids are a broad class of drugs used to address acute and chronic pain. Opioid use is nothing new. Egyptian papyrus records suggest humans have used them to relieve pain for thousands of years. The Sumerians, Assyrians, and Babylonians all utilized opium.

Opium poppy (Papaver somniferum) is a natural source of opiates such as morphine and codeine. Morphine is the primary alkaloid within the plant, and is ten times more potent than crude opium. Although highly effective for pain, morphine is associated with severe withdrawal symptoms and addiction. Chemists use the molecule as a precursor in the laboratory synthesis of synthetic opioids such as fentanyl.

The human body also creates a supply of endogenous opioids—endorphins and enkephalins—that are released and bind to opioid receptors when pain signals are detected. These receptor sites exist throughout the central and peripheral nervous systems on opioid-sensitive neurons. External opioids such as morphine and fentanyl are also opioid receptor agonists, meaning they bind to the same sites.

A surge in dopamine gives rise to associated feelings of pleasure. Because the brain tends to value what makes it feel good, it records a long-lasting memory of what allowed it to feel this way. This is known as classical conditioning, which perpetuates the desire for more drugs.

Chronic use of opioids and activation of the reward system eventually leads to brain abnormalities that underpin addiction. Some of these alterations reverse after detoxification; however, others can linger for years.

Opioid addiction is primarily treated using other opioids. Methadone—a synthetic opioid—is prescribed to stabilize patients and minimize withdrawal symptoms. It does so by binding to opioid receptors. However, methadone also harbors addictive qualities, and is involved in one-third of opiate overdose deaths.

Although these drugs work in some cases, in others they result in a new addiction. So what now? Attention is turning to cannabis, specifically CBD, as a potential treatment for opioid addiction.

WHAT IS CBD, EXACTLY? 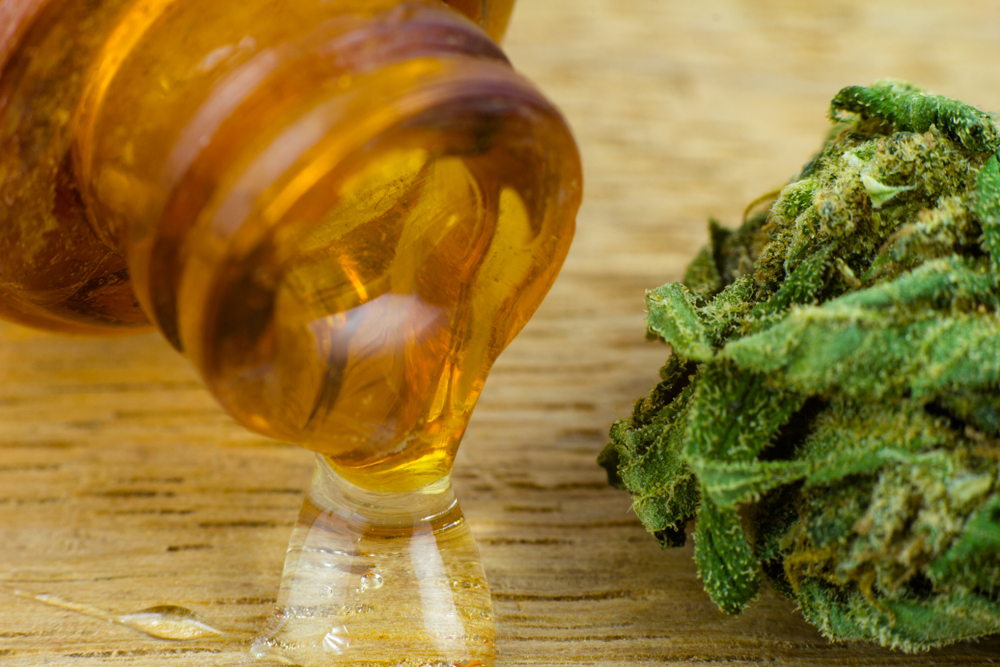 Before we get around to the potential role of CBD in opioid addiction, let’s get familiar with the molecule. CBD is one of over one hundred cannabinoids produced by the cannabis plant. The chemical is non-psychotropic, and so far is associated with anti-inflammatory, antioxidant, neuroprotectant, anxiolytic, and anticonvulsant effects.

CBD has displayed numerous mechanisms of action in studies. It’s believed to indirectly interact with the CB1 and CB2 receptors of the endocannabinoid system. This system—modulated by internal cannabinoids—plays a regulatory role within the body. CBD also exerts some of its effects by binding to serotonin, vanilloid, GPR55, and PPAR receptors.

So, what about CBD makes it intriguing as a potential treatment for opioid addiction? Well, the research is still early, but results suggest CBD has the potential to impact drug cravings. Research published in the journal Substance Abuse states that CBD is associated with various brain circuits involved in drug addiction and drug-seeking behaviors. The authors of the report claim that this mechanism of action makes CBD an exciting candidate in the treatment of substance use disorders.

A double-blind, randomized placebo-controlled study published in The American Journal of Psychiatry investigated the effects of CBD in individuals with heroin use disorder. The researchers express that, despite the magnitude of the opioid epidemic, there is a lack of non-opioid treatment medications.

The study explored the immediate, short-term, and protracted effects of varying quantities of CBD (400 or 800mg). The researchers monitored participant cravings, anxiety, cognition, and physiological status. They found the immediate administration of CBD to significantly reduce cravings and anxiety. The cannabinoid also reduced the physiological measures of heart rate and cortisol levels. No severe side effects were detected. The research team concluded that these results provide a strong basis for further investigation into CBD as a treatment option for opioid addiction.

CBD AS AN ALTERNATIVE PAINKILLER?

Beside CBD’s potential in the realm of opioid addiction, could the cannabinoid also serve as an alternative for chronic pain? If so, it could potentially prevent some patients from coming into contact with opioids in the first place.

An animal study published in the European Journal of Pain investigated CBD's effect on pain and inflammation in mice. Researchers found that the CBD was capable of reducing arthritis pain-related behaviors.

A human trial published in the journal Transplantation Proceedings explored the effects of CBD on chronic pain in patients with kidney transplants. Out of seven participants, two reported total pain improvement, and four reported a partial response.

COULD CBD PLAY AN IMPORTANT ROLE IN FIGHTING THE OPIOID CRISIS?

Early research has generated exciting results in regards to CBD’s potential role in opioid addiction. The cannabinoid appears to change addictive circuity within the brain and reduce cravings and anxiety. What’s more, the molecule is being continually explored as a possible alternative to opioid medications.

Unfortunately, the lack of comprehensive clinical trials makes it impossible to draw a solid conclusion on any of these fronts—but things do look hopeful. We look forward to the results of future research!

10 inspiring books for cooking with cannabis

Norml (national organization for the reform of marijuana laws)