Autoflowering cannabis strains flower based on their age rather than photoperiod. Click here to learn about the advantages of autoflowering strains.

Autoflowering cannabis strains are getting a lot of attention. And while they may have been dealt a hard blow with the release of Lowryder, growers are finally realizing their huge potential (despite their small stature).

WHAT ARE AUTOFLOWERING CANNABIS PLANTS?

Autoflowering cannabis strains are strains which flower based on age rather than photoperiod. Traditionally, cannabis is a photoperiod plant that begins flowering when they receive less light (usually at the end of summer or beginning of autumn).

The autoflowering trait is unique to cannabis ruderalis, a cannabis variety believed to be native to Central and Eastern Europe, and Russia. Unlike indica or sativa plants, ruderalis varieties flower at a certain age, regardless of how much light they receive.

Related Article
What Is Cannabis Ruderalis?

Ruderalis plants are short and have fast flowering times. Like indicas, they are native to slightly colder environments, making them particularly good at dealing with tough conditions and short, cold summers.

AUTOFLOWERING STRAINS: ALL SMELL, NO PUNCH? 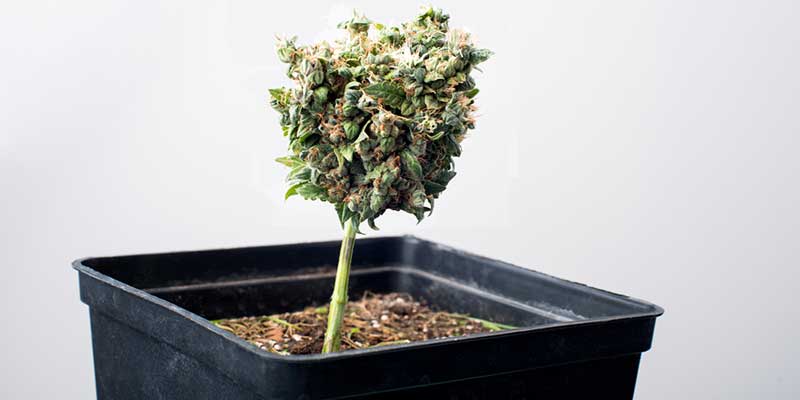 Autoflowering cannabis varieties got a bad reputation when they first hit the market. The first commercially available was Lowryder, which hit the shelves in the early 2000s.

Lowryder was bred by The Joint Doctor. It only grew to about 40cm and flowered in as little as 40 days. While some considered it a breakthrough in cannabis breeding, others labelled it a failure and a substandard strain with low levels of THC and tiny yields.

From this, rumours began to spread through the cannabis grow community that auto strains lacked potency and weren’t worth growing. In fact, the rumours spread like wildfire to a point where autos were readily dismissed as being “all smell, no punch.” However, that isn’t the case.

Autoflowering cannabis varieties have come a long way since the release of the original Lowryder. Thanks to advancements in breeding, many reputable seed banks are now producing great auto varieties that don’t substitute on quality or yield. Today, you can find auto varieties that produce just as well as regular photoperiod strains.

THE BENEFITS OF AUTOFLOWERING VARIETIES

We strongly believe every cannabis grower should experiment with autoflowering varieties at least once, Here are some of the biggest benefits of growing autoflowering cannabis strains:

One of the biggest benefits of autoflowering cannabis strains is their fast flowering times.

Photoperiod strains grown indoors can take well over 10 weeks to produce buds, while outdoor photoperiod varieties can take anywhere up to a few months to reach harvest (depending on when they’re planted).

Autoflowering cannabis plants can be ready to harvest in as little as 45-50 days. Unlike regular strain. Thanks to their ruderalis genetics, these plants need very little time to mature, at which point you’ll get your hands on some sweet, sticky buds.

THEY ALLOW FOR MULTIPLE HARVESTS

Thanks to their fast flowering times, autoflowering cannabis strains allow growers to produce more harvest per year than traditional photoperiod strains. This is especially useful for outdoor growers, especially those growing in colder climates with shorter summers.

It is important to note that the individual yield of an autoflowering variety isn’t as high as what you might get from a regular photoperiod strain. This is largely due to the small size of autos. However, keep in mind that growing autos allows you to produce multiple harvest in the same amount of time it would normally take you to raise just one photoperiod strain to full maturity.

Remember, cannabis ruderalis is believed to originate from Central and Eastern Europe, Russia, and possibly colder parts of North America. Growing in these tougher conditions has made for resilient plants.

Thanks to their genetic background, most autoflowering varieties have inherited the resilient characteristics of the ruderalis species. This means they are very good at dealing with cold conditions, as well as regular garden pests, diseases, and infections.

This makes them ideal for novice growers as well as experienced cultivators living in colder areas and in need of resilient strains that can deal with the local climate.

Autoflowering cannabis varieties are known to be short statured, almost never growing above 1 or 1.2 meters. This makes them ideal for both indoor growers working in with small, confined spaces, as well as outdoor gardeners trying to run a stealthy operation. These days there are some autoflowering strains on the market that may exceed these heights though.

It’s important to note that, due to their small stature, autoflowering strains aren’t capable of producing the same harvests as 2m-tall sativa. However, as we saw before, they have the advantage of allowing for more multiple harvests, which makes up for what they lack in size.

How long does it take to grow marijuana?

How much light for autoflowering cannabis plants?

Smoking green on the green - combining golf and weed

Today is purple day: a day for international epilepsy awareness