Can you donate blood if you smoke marijuana

Can or should you donate blood if you have smoked cannabis? The rules and regulations differ widely, depending on where you are.

Where and under what circumstances can you or are you allowed to donate blood if you smoke cannabis? In the United States, this is not a big issue. In some parts of Europe, however, it can be.

Wether or not you can donate blood if you are a cannabis user sounds like a fairly straightforward question, however, it isn’t. The issue is actually just one on the cutting edge of healthcare reform. Truthfully, it has not been studied or much examined.

Further, it is important not to mix up two ideas. Drug testing for “illicit” drugs (for employment or sports participation for example) is one thing. Blood donation is another. As the security of the blood supply is actually a critical public health issue, it is tightly regulated.

However, if you are in a location where public policy is blind to the issue, your donated blood will most likely not be screened for THC.

SO CAN I DONATE BLOOD IF I SMOKE POT?

The answer to that question is that it depends.

There are places where you can be a pot user and donate blood. This includes the United States. The American Red Cross and other authorities do not screen the blood supply for cannabis. The only reason you could not donate blood is if you showed up to the blood bank visibly high.

In general, blood banks want to know if you have engaged in risky sex. This includes unprotected sex with a casual partner. While many blood banks specifically question homosexual sex, technically this should be a gender-blind issue.

If you have been travelling to any hotspot country or have a contagious disease they will not allow you to donate.

Needle use for any reason is also a practice that is frowned upon. If you have injected yourself with an illegal drug, you are off the list automatically.

Getting tattooed recently in certain jurisdictions also bounces you off the list. You must also be sober at time of donation.

That is about it.

If you are in Europe, however, cannabis users may not be allowed to donate. In Norway, for example, marijuana users are not allowed to do so. Apparently this is because of a fear that supposedly pot smokers do other illegal drugs as well.

The fear here is less anti-pot than anti supply contamination. You must prove in fact, that you have been abstinent for a year in Norway before being allowed to donate again.

Easy answer? Regulations, where they exist, are mainly being driven by political rather than other issues. Just check local regs if you are worried.

SHOULD I DONATE BLOOD IF I SMOKE CANNABIS? 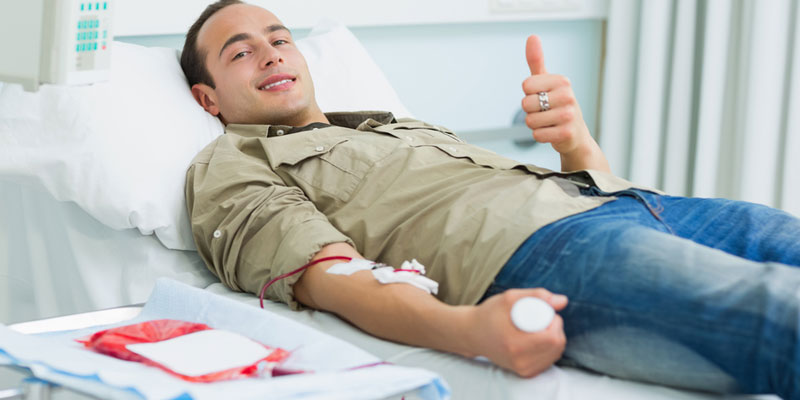 This is another issue altogether.

For the most part, it might be that a cannabinoid-boosted blood supply might go a long way in helping an overall population. The fact is, there has been no systematic research on the same.

There are also populations of people for whom a cannabinoid infused blood supply might be less than optimal. This includes infants, children and expecting or nursing mothers.

How long cannabis is detectable in blood depends on various issues such as your bodyweight, how much fat you have, the speed of your metabolism and a few other things.

Heavy users will of course have traces of it in their bloodstream longer than the occasional user. Cannabis use impacts blood flow too. How this might impact donors is still so far unknown.

In general, however, beyond the regulations, know this. Cannabis is technically a “blood contaminant.” How long it is one, is still unclear.

As a rule of thumb, if donating blood as a regular cannabis consumer, try not to smoke at least a week before you donate.

If you are a medical user, it is probably best to skip this aspect of civic duty unless you can abstain for a sustained period of time.

How to pass a marijuana drug test

Which marijuana ingestion methods are there and what are their differences?

Is freezing your weed a good idea?

Cannabis use during the vietnam war

Does the use of rolling paper affect your health?