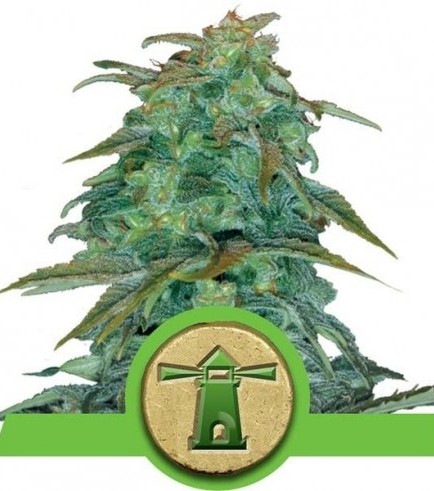 Haze varieties of cannabis are extremely popular for their trademark sativa highs that offer cerebral and heady sensations with an exciting buzz. One of the main issues with haze strains is that it takes them quite a while to reach maximum height and to put out some resin drenched flowers. Royal Haze Autoflowering offers a great loophole around this matter, introducing autoflowering traits into the haze lineage that makes for rapid growing times to get haze in stash jars as quickly as possible.

Royal Haze Autoflowering consists of 50 percent sativa genetics, 20 percent indica genetics and a final 30 percent of autoflowering ruderalis genetics. The strain is the result of some pretty legendary crossbreeding between well known parent strains Amnesia Haze and Skunk, along with cannabis ruderalis to bring autoflowering genes to the table.

Royal Haze Autoflowering does have indica elements to it too, offering a slight body high associated with quite serious cases of the munchies. This high is widely recognised as good quality and fun, proving its worth as a HighLife Cup Winner.

Royal Haze Autoflowering has quite a broad range of stenches that are released as the strain is lighted. Obvious detectable smells within the scent of the strain are skunk, citrus and tropical factors.

As an autoflowering strain Royal Haze Autoflowering is very easy to grow and serves as a great introductory strain for beginners in the art of cannabis cultivation. The strain also has the typical autoflowering trait of being small and compact, it is able to be grown in the smallest and stealthiest of places, away from the risk of discovery.

Royal Haze Autoflowering reaches heights of 85 cm when grown indoors within a grow tent, and grows considerably highers when cultivated outside to heights of 150 cm. This strain does a lot better in more mild climates and goes from seed to harvest within a rapid time frame of 12 weeks. The buds produced by this strain contain a THC content of 15 percent.

Grow your own Royal Haze Autoflowering