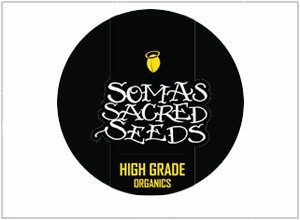 Soma Seeds is an Amsterdam based marijuana seed company that was started by Soma himself. Soma was only 18 when in 1967 he was working at IBM in New York City and after a long day he lit up a spliff. He liked the feeling of getting high and the way that it calmed him down so much that he continued to use it. In fact he claims that it is one of the most positive forces in his life.

In 1971 Soma was the owner of a vegetarian restaurant and bakery in southern Vermont and he really started developing an understanding of nature, ecology and the environment. This was the point that Soma decided to grow organically and eco friendly.

Soma believes that marijuana is a sacrament and a medicine and should be available to everyone. He is constantly looking for ways to surround himself with the plant he loves so much in the form of clothing, paper, food and smoke.

Soma has created some very special genetics and has won several Cannabis Cup winning strains like Somango, Lavender, Buddha’s Sister and Amnesia Haze (not to be mistaken with Amnesia).

All strains by Soma Seeds