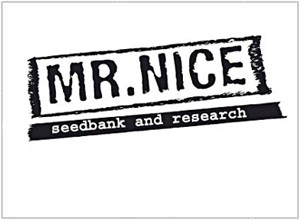 Mr. Nice Seeds was founded by Shantibaba and Nevil Schoenmakers, who are both very experienced seed breeders. They were also in collaboration with Howard Marks (Mr. Nice), who has been described as the "most sophisticated drug baron of all time." Unfortunately Howard Marks passed away 2016 at the age of 71.

Since their inception in the 1990s, they have produced a huge amount of award winning strains such as Super Silver Haze, Critical Mass, Nevilles' Haze and Black Widow.

None of the strains they create are ever lost due to a policy of widespread seed dissemination. Mr. Nice Seeds' facilities are all indoors in a completely climate controlled environment with pollen-proof rooms. All of Mr. Nice Seeds' products are produced in their own research laboratories.

For many years, Mr. Nice Seeds has been studying and advocating for the medical benefits of cannabis. This resulted in the CBD Crew in collaboration with Resin Seeds from Spain.

All strains by Mr. Nice Seeds