Can marijuana be beneficial for introverts? Or is it a no go?

Should introverts use marijuana? Or does marijuana make introverts? Here are some explanations as to why it is good to be an introvert with marijuana.

Some people are really extrovert, while some people really like being introvert. And there is nothing wrong with either. But although with most introverts it is not the case, being an introvert is unfortunately sometimes associated with loneliness, being anti-social, and even depression.

However, this is not always the case, as there are individuals who are really just more comfortable spending time with themselves. To each his own, as the old saying goes. And let’s be honest, we all know that guy whom we wish was a bit more introvert, am I right?

But in this day and age where cannabis use is more widely accepted in different parts of the world, it can be said that it is also a good time to be an introvert. It is nothing new that cannabis can be great company to have around when you are by yourself, with yourself.

This claim, of course, is backed up by science and logic, further establishing how marijuana is indeed a wonder herb for humankind.

MARIJUANA AS THE ORGANIC ANTI-DEPRESSANT

Although most introverts don’t connect solitude with loneliness, some scientists and doctors claim that introvertness can cause depression.

Previous studies have shown that acetaminophen, which is more commonly known as ibuprofen, particularly interacts with the regions of the human brain that contains cannabinoid 1 receptors.[1] These receptors are the ones that influence responses developed from social interactions.

It was then found out that ibuprofen tends to lessen the intensity of emotional distress caused by being social, particularly for introverts who are more affected by it.

With that in consideration, psychologists like Timothy Deckman and C. Nathan DeWall began equating how cannabis can have the same or even greater effects on the human brain like ibuprofen since THC also interacts with the same cannabinoid 1 receptors.[2]

In a study they have conducted on more than 5,000 Americans comprised of both smokers and nonsmokers, it was concluded that those who used cannabis were less likely to suffer from feelings of low self-worth and loneliness, compared to their non-using counterparts. A parallel test that was later conducted among 500 participants also showed that the cannabis smokers were less prone to suffer from depression.

MARIJUANA AS THE NATURAL BRAIN ENHANCER 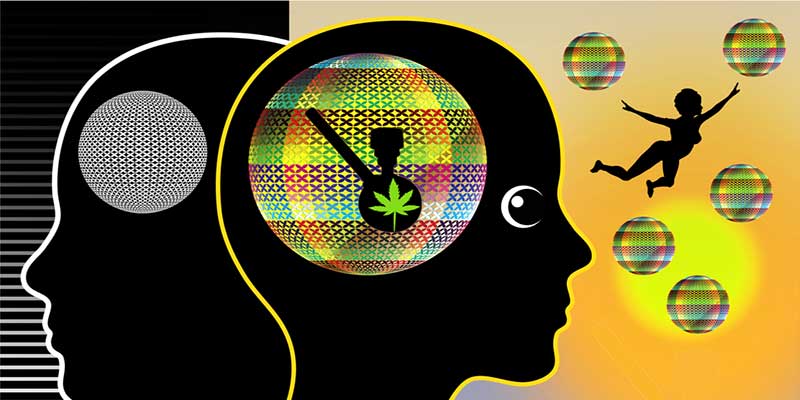 Since introverts spend a huge chunk of time for themselves, there are also great opportunities to enhance creativity. After all, there are several outlets to do so, from writing, painting, to playing music, just to name a few.

But how exactly can sparking up a joint turn an individual into an instant artist? One theory that experts have is that cannabis can cause a release of dopamine in the prefrontal cortex. This is the part of the brain that is responsible for decision-making and complex behavior. The sudden dopamine release is being pointed to as the reason behind the burst of ideas that may have just been buried deep in the psyche.

Of course, not all strains are created equal, and there are particular ones of the Indica kind that tend to have more relaxing and sedating effects. Sativa strains, meanwhile, are more cerebrally focused, which is ideal if you choose to channel your creative side.

To answer the question, cannabis use can indeed enhance one’s introverted tendencies. But ultimately, it only makes for a more productive and insightful time alone.

How to make weed-infused sugar

Osmosis: the key to how cannabis plants consume water and nutrients

How to store weed the best way