What are the health risks of synthetic marijuana (fake weed)?

Spice or K2 are just some of the names given to synthetic cannabis; a range of toxic smokeable herbs marketed as producing the same effects as regular weed. But what exactly are these products, how are they made, and are they really as dangerous as they’re made out to be?

WHAT IS SYNTHETIC CANNABIS?

Synthetic cannabis (fake weed) refers to a wide range of chemicals which are marketed as resembling the compounds found in marijuana.

These products are usually sold in little ziplock bags at smoke shops and service stations, or over the internet via countless online smoke/head shops. Synthetic cannabis usually looks like a regular chopped herbal smoke blend and is marketed to unsuspecting customers as having the same effects as cannabis.

It is very important not to confuse synthetic cannabis like Spice or K2 with synthetic THC like Marinol; the former is literally an unpredictable chemical cocktail offering a bunch of serious health risks while the later is a THC supplement used for medicinal purposes.

Related Article
How To See If Your Weed Is Contaminated

HOW IS SYNTHETIC CANNABIS MADE?

THC is the main psychoactive compound found in weed. Synthetic cannabis is basically made by taking a synthetic compound that supposedly produces similar effects to THC and inserting them into a kind of chopped herb either via spraying or immersion.

The exact chemicals in synthetic cannabis varies greatly. In most places, drug enforcement agencies began cracking down on synthetic weed after horror stories of people suffering a vast variety of nasty side effects made headlines.

This means that the manufacturers behind synthetic cannabis regularly change up the chemical composition of their product to slip through loopholes in the law.

THE HISTORY OF SYNTHETIC CANNABINOIDS 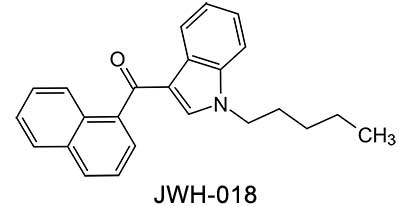 Synthetic cannabinoids were first created in the 1980s by John William Huffman, a Harvard graduate and professor of organic chemistry at Clemson University in Clemson, South Carolina, USA.

Huffman was using these synthetic compounds for research purposes to better understand the compounds of cannabis, how they work, and how they interact with the human endocannabinoid system

However, after publishing some of his work in 2008, one of his cannabinoids (known as JWH-018) was reproduced in a lab in Europe, where it quickly found its way onto the streets and was sold as “Spice.”[1]

From there things only got worse, with drug manufacturers producing hundreds of synthetic compounds and shipping them all around the world to be marketed to innocent, experimental customers.

Related Article
How To Check The Quality Of Marijuana

WHY IS SYNTHETIC CANNABIS DANGEROUS?

Synthetic cannabis is dangerous for a wide variety of reasons. First of all, it can be much stronger than regular weed. In fact, a 2014 study published in Drug and Alcohol Dependence found that these cannabinoids can be anywhere between 2-100-times as strong as THC.[2]

Besides that, the study also found that synthetic cannabinoids and synthetic weed can produce a vast variety of extremely nasty side effects, including:

Another main reason synthetic cannabis is so dangerous is because it’s unpredictable. Synthetic “cannabinoids” are made using high-proof alcohol or acetone solvents and then infused into a plant-like material by either spraying or soaking it.

There are plenty of things that can go wrong in the production process; poor spraying or immersion can cause chemical “hotspots” in the product that are extremely concentrated and potent and able to produce extreme side effects.

Plus, with no standards governing the quality of these products, customer literally have no idea what they’re getting. Manufacturers regularly change up the chemical cocktail that goes into their products to stay above the law, and there is no way to hold them accountable for a particularly bad product.

There is also no way for customers to verify the potency analysis of their product, safely manage doses, or even be sure that they know which cannabinoid they’re consuming.

Related Article
Less Is More: How To Properly Dose Cannabis

IS ALL SYNTHETIC WEED DANGEROUS?

Unless there are ways to regulate synthetic cannabis products, you simply can’t be sure they’re safe. In order to be able to use any substance safely, you need to be able to know how strong it is, how to administer it properly to achieve the desired effects, how it was produced, what it contains, etc.

Finally, you also need a point of contact whom you can reach out to for more information about the product or any complaints/comments. Unfortunately, until that’s the case, it’s impossible to say that synthetic cannabis is safe.

After reading all the above information, you’re probably wondering why people are still willing to experiment with such an unreliable and potentially dangerous substance.

Well, it all comes down to legality. Unfortunately, we’ve been conditioned to believe that anything that is legal is safe and reliable. But there are many examples where that is not the case, and synthetic marijuana is just one of them.

By legalizing cannabis, the market for synthetic substances like Spice or K2 literally disappears. Until then, there’ll always be a market for these substances, consisting mainly of innocent customers looking for a little “buzz” but worried about getting busted by the cops.

5 tips to save your dried-out old weed

Wiz khalifa shows us how to roll the perfect joint