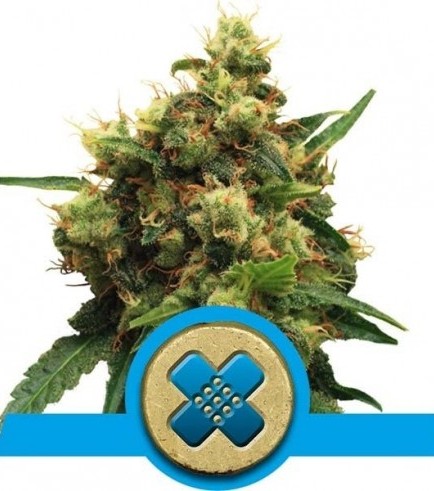 Painkiller XL Is a Sativa Domiant Hybrid Rich In CBD

Painkiller XL is a sativa dominant hybrid strain that contains 75 percent sativa genetics and 25 percent indica genetics. The strain is the result of the crossbreeding of parent strains Royal Highness and Juanita la Lagrimosa.

The name of the strain gives an insight into the medical nature of the plant, which contains large amounts of the medicinal cannabinoid CBD and relatively low amounts of psychoactive THC. This ratio is something that a lot of medical cannabis users favor, it enables a good medicinal effect without the side effect of getting too stoned. Many patients opt to use CBD due to its apparent medical effects, which include relieving pain, anxiety, migraines, and inflammation. CBD is also showing massive promise in assisting seizure disorders.

Painkiller XL fills the middle ground between strains that are incredibly high in THC and low in CBD, and strains that that very high in CBD with almost no THC. The strain has an almost equal quantity of each cannabinoid and contains approximately 9 percent of each in its flowers. This is good news for medical patients who still enjoy the sensations of getting stoned. Plus, THC has many medical benefits of its own too.

The sativa dominance of Painkiller XL means the strain offers a cerebral head high that is defined by feelings of euphoria and uplifting states. The high is reported to be very clear and physical.

Painkiller XL has a flowering period of around 8 weeks. The strain can tolerate both indoor and outdoor growth and prefers a mild climate. If growing this strain within an indoor grow room or tent then expect to see heights of between 60 and 100cm. This small size is functional and useful for growers who are dealing with limited space or simply desire to keep their grow operations secretive and out of sight.

Indoor yields are reported to produced an impressive 500 to 550g per square metre. Outdoor plants grown within garden beds or pots will achieve taller heights of between 120 and 150cm and will produced yields of 500 to 550g per plant. The harvest time of outdoor grows typically occurs around the end of September.

Grow your own Painkiller XL