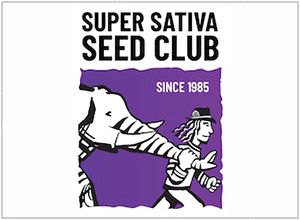 It was formed when the legendary character “Sam the Skunkman” gave Karel Schelfhout, one of the founders of Super Sativa Seed Club, Original Haze and Skunk #1 genetics after seeking refuge during an escape from the Californian authorities. These original genetics were harnessed by Schelfhout and used to create the foundation of the Super Sativa Seed Club genetic library, making it what it is today.

Sam The Skunkman wasn’t the only big contributor to this high-quality genetic library. Schelfhout also received genetics from Neville’s Seedbank, the only seed bank that was developed before Super Sativa Seed Club. Neville received 10 seeds from Sam and merged the genetics with specimens that he obtained whilst strain hunting in Afghanistan.

Schelfhout received some of these new seeds from Neville, merging them with the seeds he was gifted from the Skunkman himself, forming the first wave of Super Sativa Seed Club genetics.

The strains developed by the company in the early days were of such high quality that they soon reached worldwide legendary status within the cannabis community. High Times Magazine caught wind of these ambitious activities, publishing a story about the seed bank. The exposure resulted in massive sales and worldwide fame.

After a period of immense success, the founders of the operation parted ways, an act that led to the loss of the majority of the seed collection. However, Schelfhout was able to preserve a daughter of Haze and Skunk #1, with the rest of the original genetics fading into legend.

Schelfhout went on to breed a new range of genetics for coffeeshops and cannabis social clubs. He also established himself as an authority of indoor growing, developing hydroponic techniques and mineral fertilizers.

His son, Kees, now spearheads the company and made it his mission to reintroduce some of the original flavors and qualities of Haze genetics into their seed collection. These days the Super Sativa Seed Club offers some stunning varieties, including Karel’s Haze and Prima Holandica.