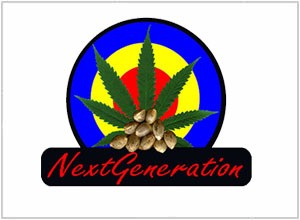 Next Generation Seed Company might sound new, but Jason Baker, also known as Jay Generation or Romulan Jay, officially launched NGSC in 1997. They started off in Vancouver, British Columbia, Canada then moved to Europe in 2008 to enjoy the friendlier legal climate that Holland and Spain had to offer. While there, they honed their feminization and autoflowering breeding techniques.

Now that Canada has reformed their cannabis laws, Next Generation is back in Canada. Throughout his career, Jason held firm and continued to refine and improve the best Canadian genetics, especially the Grapefruit strain.

Next Generation Seed Company has a stellar reputation. In addition to numerous Cup wins, they were inducted in the High Times Hall of Fame in 2008. If you're a fan of Jorge Cervantes earlier grow videos, you'll get a glimpse of exactly what NGSC can do. Many were filmed in their gardens.

All strains by Next Generation Seed Company